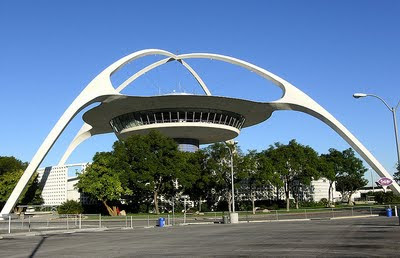 I'm in Los Angeles. The ten hour flight was actually quite nice. The five hour war of attrition that was the queues in LAX weren't. There are lots of different queues and lots of people in tight trousers shepherding you into this or that line. I did as I was told. Only I chose a very bad line.

From the back of the line it was impossible to see where the front of the line was. It emerged part way between several booths, two of which were occupied by Customs Officers. But only one of them was calling people from the front of our particular line. The other was looking to a different queue... one that was already being serviced by three other officers. The line to our left was also leading to multiple officers. Only our line was leading to only one officer.

There were rumblings of discontent from my fellow visitors. Screams of complaint were made. Quite something in an airport. Nobody wants to upset the people who decide whether or not you can enter a country after all. One man insisted to us that our line was leading to two different officers as if we were imagining what our own eyes could see us. He wandered by three times and had the same conversation. Before finally deciding that we might not be making it up and going to take a look himself. He then told the second officer that he was meant to be looking to our line for his next visitor and he duly obliged. Problem solved.

Except that he only processed two more people before clocking off. Fifteen minutes later a new officer turned up in his stead. And proceeded to invite people from the neighbouring line and not ours. Uproar broke out again. A couple of people were close to storming the barricades. There were what can only be described as hollers. Yes. Hollers.

Eventually a supervisor came along and was yelled at by five different irate passengers. You could see that she thought we were just a rowdy bunch who needed to understand that this process took time at first... but then slowly it dawned on her that there was sincere pain in those eyes and that we really had been in that line for three hours. In three hours I had travelled ten yards. She took us seriously. She asked who had been on the British Airways flight... a flurry of hands went up. Mine included. She pulls a handful of us out of the line and walked us - with begrudging apologies - straight to the front of some other lines. Such a relief.

Oh yeah... and then I picked up my suitcase and had to join the 40 minute queue to leave the airport. I've never seen one of those before. The journey from plane to hotel ended up taking up half the time of the flight itself. Ridiculous.

Having got here I checked my email to discover that I've got the chance to put in two more Edinburgh previews. I'm a firm believer that you can't do too many - and the four that were already in had sold out so I figured it was worth trying to squeeze another couple in. It's short notice so I hope we can still shift enough tickets to make them worthwhile.

They're on July 20th and July 21st. The first is in Maidenhead - at the Norden Farm Arts Centre (details) and the second is at the New Greenham Arts (details).
Posted by Dave Gorman at 10:38 AM

Dave, I sympathise,but you think you had a hard time? Try doing it as a cruise passenger. http://www.cruisetheoceanswithemma.com
Use the Archive button to skip to the article entitled Los Angeles dated May 30th. Nine and a half hours, mate. Nine and a half hours.
Good luck with the extra previews.

You don't fancy popping on a flight up to San Francisco and doing a preview show up here do you?

Queues are funny things anyway... there must be some scientific law (a variation on Sod's Law I imagine) that states that the queue you are NOT standing in always appears to be moving at a faster rate, right up until the precise moment you swap over to it. Happens time and again...

@sfmag: I'd love to. But I'd have to pop home to get the laptop with the powerpoint on it and I'd probably have to do some big rewrites too...

@Craig Jones There is such a law... but this time the slow moving line was fixed at us and was caused by organisational incompetence on behalf of our hosts. Annoyingly switching lines wasn't really an option because even the quick moving lines were taking ages. After investing two hours of time in a queue and getting over half way through it, you're kind of trapped where you are.

@Jayel Aheram: not a gig as such. Taping something for BBC America. It's on Saturday. You can come:
http://on-camera-audiences.com/shows/Moral_Dilemma#

Presumably the LA preview is some kind of secret gig? I can't see ticket or venue details anywhere...

Ignore that, just saw the comment above. Too late!