Do you want a GORSCREEN?

So, the series launched last night and I've been completely blown away by how positive the reaction has been. Thanks everyone. If you didn't catch the show and want to, there's a repeat at 10.40 tonight (Wednesday) and another on Saturday night at 11. And I think it can be viewed on demand on the Dave website for a few days too.

If you haven't seen it, I don't think there's anything that will be spoiled by showing you this picture from the show, featuring the, er... GORSCREEN. 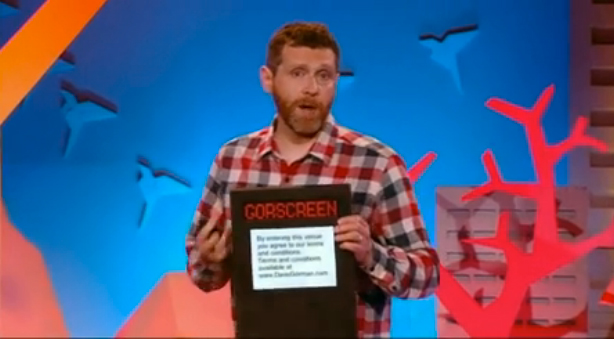 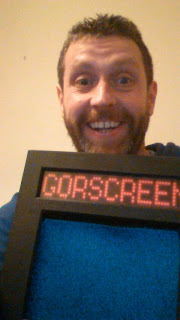 I mentioned on Twitter last night that the props department had given me the GORSCREEN frame after the show and that I might give it away in a competition if people were interested... and some people do seem to be. So I guess I ought to work out a way of doing so.

Sometimes when I see someone running a competition on Twitter (RT this/use this hashtag/that sort of thing) I think it can be a way of encouraging people to spam their followers by filling their timeline with things and I definitely don't want to do that. Nor do I want to do anything that people might mistake for that. And besides, I don't want to exclude people who might follow me on facebook but not on Twitter... or for that matter anyone who does neither of the above.

I also have to think of a way of actually picking a winner. So what I've arrived at is this: a competition for members of my mailing list.

On Monday, I'll email my mailing list a question about episode two in the series.
There'll be a special email address you can send the answers to. On Friday I'll pick a random email from amongst all the right answers. And then I'll send them the GORSCREEN frame. (To be really clear... it's a wooden frame that has a space where you can mount an ipad. Or at least that's what we hung in it. I don't own an ipad. So it really is just the frame. But, y'know... it's quite nicely made!)

Hey, as it's a competition I suppose I ought to have some terms and conditions. Ha ha. Here we go:
To enter the competition, you have to be on my mailing list. I don't want that to put people off. I promise I don't send out loads of emails. I only really use it to let people know when I've got new things happening and I don't store the addresses on my own computer or anything like that. Realistically, I'd rather a prop from the show went to someone who was interested in what I'm doing next than someone who just saw a retweet from their mate one afternoon and sent a reply. That said, it's easy to join and just as easy to leave too. I won't even know you've done it. You can subscribe - or unsubscribe - on this page of my website.

Only one entry per person. Let's not be silly.

If you think you've signed up to the mailing list but the email with the question doesn't turn up... I can't be held responsible for it. I will send the email. Check your spam folder. Did you confirm your subscription? etc etc etc. If an email address bounces back to the list a few times it can end up being deleted from the list also.

Er... well, that should do it. Y'know, allowing for common sense and all that. If you think I've missed anything out, leave a comment on the blog and I'll try and keep on top of it all. (Oo... oo... I know. These terms and conditions are subject to change etc etc etc... they always say that, don't they?)

I really am hugely chuffed by the response to the show, and I hope people will enjoy the other five shows too. If there are other props, objects, souvenirs or what have you that I can think of from those shows... maybe I'll do this again with other, um, prizes.

Big thanks to everyone who tweeted, facebooked and emailed kind words. You're lovely you are.
Posted by Dave Gorman at 7:58 PM

that is great offer but i dont have a ipad, could i use it as a picture frame with a photo of a ipad?

Please Do Not Feed The Animals. said...

Well I don't have an ipad either. It's not a very practical ipad holder. But it was an effective prop. But you can use it for whatever you want. (If you win it)

How exactly will the winner be picked?
Often in these kind of competitions, the competition holder just flicks his scroll wheel up and down for a bit and then points a finger at the middle of the screen. This of course is far from a uniform distribution of chance and will pretty much exclude the first and last bunch of respondents from having a chance at winning, while favouring those in the middle.
I normally wouldn't bother asking this, but you seem like someone who cares about these things too.

@Unknown: I am indeed someone who cares about that sort of thing and one of the things I did when working out how to do this was ask a more technically minded person than I for advice. There is some software that can be used to select an email at random apparently. So I'll be using that. Oo, it's like a real competition!

I will stay here with the blog I am a blog person, I love my blog we are pals (OK I have three blogs but only one that I use every day). Good luck with the comp and if you have problems finding a winner there is always a small person in the Blue Peter audience who will look pleased and vaguely confused and will clutch at the gorscreen enhancing its desirability on ebay......

@Dave: Good to hear that! I knew you would deliver. :)
(I am the Unknown from above. Not sure how that happened.)

Just checking... is that _all_ the terms and conditions up there? ;^D

(Oh... did anyone else spot that the first transmission on Dave had the Dave ja vu ident onscreen?)

Is the competition open to anyone worldwide - the T&C don't stipulate?! ;) If not, I can use my parents' address in UK (on the tiniest chance I might win it!)

@Gio that is all the Ts&Cs but as the Ts&Cs include a "these are subject to change" clause, you never know...

@Vince: No the answer isn't 10:08. I can't imagine what question about episode two would yield that answer!

@Anna Wang: Thanks Anna. I'm glad you enjoyed it. And I hope you'll enjoy the rest of the series too.

[Insert something witty]
Ok, so I'll leave the comedy to you. Great show, well done. It's so nice to look forward to something and not be disappointed.

Oh dear God a posed photo of me came up. So very sorry.

Me and the wife watched your show and I can truly say how happy we both were to see that you are still upholding the beard and plad.

Bye now, I need to visit the gentlemen's convenience.

Can I hook it up to something...like a Raspberry Pi?

I hope I'm not too late to join in.

@Kobalt: it's a wooden frame in which we suspended an iPad. That's what worked for us as a prop. I don't know what else will fit inside it... but I get the impression other people know seem to have plans for it, should they win it.

@Lee: I sent the email with the question on it this morning in the early hours. So it's probably too late. But if there are suitable objects in other shows I might do something similar again.

Of course, I hope people will want to be on the mailing list for the sake of being on it. I try not to send too many emails so as not to harass people. Tickets for the TV recordings were free for example - and because we did two shows a night there weren't that many. As far as I can tell, most of those who came along were on my mailing list because I tend to let them know a day or two before those things are made public.

Good show tonight and I have sent my answer :) hope I win