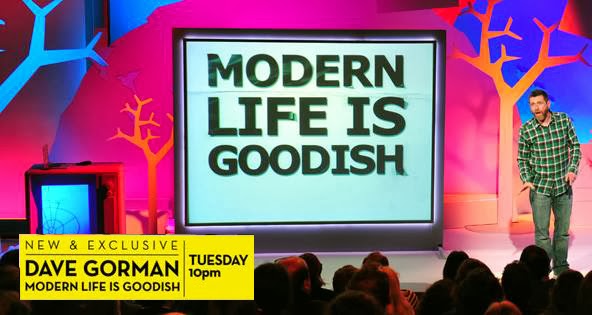 So episode two of the series airs tonight... and there's something in the show that illustrates a point I've been wanting to make for a while about how we made it that answers some of the questions I've been asked a lot in the last week.

If you've read a previous blog about my last tour you'll know that what I do - which involves a lot of found media (screen grabs from websites, magazines, newspapers etc etc) - creates a legal challenge when it comes to filming things. A few people have asked me why we've been able to include certain material in the show given that it would have been impossible to put it in a DVD.

It's complicated, but in essence, with a DVD, if someone wanted to argue the toss legally over me showing something it's possible to end up in a situation where we'd have to pulp all copies of the DVD and delay release until the dispute had been settled and that means that - even if we won a dispute (which we would do) - it would be too costly...

Anyway... I think it's worth saying that the channel (and the production company) have been brilliantly robust about these kind of issues and taken a far more common-sense approach than I've experienced in the past elsewhere.

One of the things that is often frustrating with TV is the idea that they have a process that can be applied to other things. When a comic builds a live show, they do it by going out and trying out material in front of real audiences. People try out new ideas in low(er) pressure gigs where the audience knows that that's the deal. They do preview shows in smaller venues and at cheaper ticket prices while they hone stuff. And all being well, by the time they're on tour with their name above the door so to speak, the show all works. Because it's been engineered that way.

Too often there is an attitude in TV that they can replace that honing process with a series of meetings. That having a round table script discussion with producers and lawyers will help to hone material in the same way that performing it to an audience will. It's nonsensical to me. I like collaborating, I'm not arguing that they should cede everything to control-freak performers, just that micro-managing the details by committee isn't a very helpful way to work. Not for me, anyway.

It's why with this series we did a load of live previews before the recordings. We were trying to do our editing before the taping, not afterwards. I always dislike watching shows that feel like they were made in the edit suite. It meant that we never had a paper script for the show... I don't want to learn a script, I want to see how the words fall out the first time I try to express the idea in front of an audience and then try again tomorrow if it falls out wrong. I find learning a script impedes the part of the brain that is meant to be engaging with the idea and it starts to sound like a recording.

But lawyers like to have scripts. They like to know precisely what is going to be said and are reluctant to offer an opinion about it until they do. And they are always reluctant to offer an opinion anyway. A constant refrain from the making of this series was:
Lawyer: What exactly are you going to say?
Me: I don't know yet. But tell me what exactly I can't say?
Lawyer: It doesn't work like that.

But we got through it.
The material in tonight's episode was previewed in Fareham and in Windsor. So if you came to one of those shows, you saw a rough version of most of what's in the show.

Apart from one bit. One teeny, weeny... but hugely significant bit.

It couldn't have panned out the way it did if we'd had lawyers demanding scripts in advance. Weirdly, it's the fact that they accepted the idea of honing the stuff live - and without a paper trail of words for them to stay on top of - that meant tonight's show was able to contain the surprise it does.

I've tried to be oblique and spoiler free... but I hope you can catch the show. 10pm. Tonight. On Dave.
Posted by Dave Gorman at 1:39 PM

Surely you cant be the secret father of a Royal love child.

the secret is out for anybody that watched another MARVELOUS show tonight... outstanding observations again Dave, I like the twist with the secret you had to keep and I can't wait for next weeks show, your one of a kind and no look-a-likes in sight..

Keep up the great work entertaining the nation

I have to admit that the twist regarding the secret was priceless. I'll not spoil it for anyone who hasn't seen it, but I honestly thought it was going to be someone a lot closer to you who'd made that inquiry. It's nice to read about the lack of a paper trail as that's just something you wouldn't be able to write. Pure Genius.

My fiance and me were looking at that agency a few weeks ago (he does Jack Sparrow as a lookalike. We saw the said entry on the website and wondered who would want to hire that particular lookalike..(we did also wonder who would apply for it, but concluded that said lookalike was very good but the hair was a bit wrong)

Now we know. Thanks for answering our unasked question - Hilarious.

You Sir, are a genius.

FWIW - I think Dave have done a good thing here. The show feels much more natural (ie like Googlewhack or Are you Dave Gorman), than Genius did for example.

Enjoying the series. Thankyou for making it!

Saw this and thought of you...

Matching your eyes for the benefit of the Daily Mail is surely above and beyond...

Was very disappointed either you or the production company didn't get your twin involved in the "secret" bit… until I remembered he looks nothing like you :)