This Isn't A Humble Brag 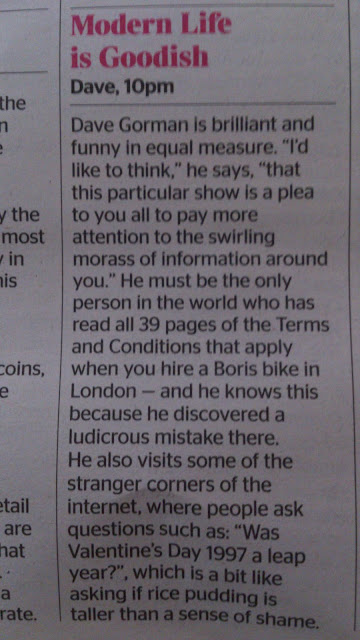 I don't really understand the idea that you'd make a show and then not want people to watch it or coolly not mention it and just hope that people find out about it somehow.

This was in The Times yesterday... on Tuesday's TV page.

I expect the first line will be used as a pull quote.

That said, it occurs to me that you could have those two qualities in equal measure by having none of either as well, but I don't think that's what he means.

At least I hope it isn't.

Have I mentioned the show's on Dave at 10pm on Tuesday?
Posted by Dave Gorman at 10:04 AM

Cannot wait to watch, was really enjoyable being part of the audience and left me wondering and excited about the other shows.

Thanks Anon! It was really important to me that we tried to make shows that were fun on the night, rather than shows we could make look funny in the edit. I think they've kept their feel through the tellification process.

Have always loved your wit and humour Mr Gorman. Sadly I do not have Dave available, well I dont think I do as my sky box came out of a skip and is a bit fickle. I may have to wait for the DVD.

Did you really read all the terms and conditions to hire a Boris bike . . . although if you say

Hire a Boris Bike nudge nudge wink wink I can see why you would...

@Rob Z Tobor: I would have thought, even a Sky box that came out of a skip would have Dave. Unless it has nothing and it exists in order to fool people into thinking you have satellite/cable TV. And yes, I did read all the Boris Bike Ts&Cs

Hi Dave-o! it's Steve-o! Joking, it's unfortunately not. I miss not seeing your works of hillarity so when I saw this about 2 minutes ago I got very excited. Can't wait!

@Lilian Thanks. I think your post illustrates my point really. The idea that we should make things and then coolly not mention them is a bit silly. I've blogged about the show before, told my mailing list etc etc... but nobody can expect everyone to see everything they say/do. I'm delighted this crossed your path!

@Rob and Dave - Dave (the channel) is free to air via freeview, but oddly only available with a subscription package through a Sky box.

I've found an online streaming service that carries Dave. Bizarrely, their terms of use prevent sharing any links to them ("...neither may they use or distribute URLS") - nonetheless, here it is :http://www.tvcatchup.com/watch.html?c=14 . I hope that's some use.

I hope Dave are planning an on demand service, like they did for Red Dwarf X. I don't have a TV (now there's a humble brag), but don't want to miss it.

Dave--American fan of yours here. Do you (or anyone) have a way I could see this abroad? Congrats on such effusive approbation!

Thank you Mr AP that explains that. And thank you Mr Gorman for responding to my humble self, it was very kind of you, in fact rather Goodish...

I must learn to type

Thanks all for the kind words. And the informative ones too. @TeacherRefPoet I'm afraid I can't tell you more than is already contained in this thread... but thanks for your kind words.

Excellent! Heard your voice on Absolute this morning on an ad, and had pangs of missing the show :( Set the TiVo box for this - looking forward to it!

I am of the opinion that both measures are plentiful ;) Missed you at The Fringe this year, having had such a cracking show a year earlier! Hard to be a good powerpoint I say :)

Thanks Debz! I hope you enjoy the show. It's actually two years I've not been at the Fringe. I was there in 2011, last. Mind you, there were 8 years off before that one too. I promise not to make it an 8 year hiatus this time round.

Just seen you, Dave, on Dave. Loved it. I've always been an acute observer.
This might serve as an introduction to observation for total newcomers:
From about 1937
http://i644.photobucket.com/albums/uu170/Emettman/News1.jpg

I thought I read somewhere that your PowerPoint show would never make it to tv due to all of the slides having to be cleared for copyright. Did the TV channels lawyers sort all that out to enable you to show the powerpoints ?

Looking forward to next weeks.

Hey Dave
Wanted to congratulate you on a MARVELOUS show last night.

Never laughed so much... Wish sometime we could all see the outtakes and stuff that didn't quite made it to the TV show!

Anyway on the subject of Leap Years
I winged over to Yahoo Answers
and look what I found;
"We are printing a calendar for 2008. How many weeks in 2008 as it is a leap year?"

...I was hoping for one of the answers to be 'that Depends'

Keep up the good work, looking forward to next weeks episode

Was really looking forward to watching your show on demand, but alas, I'm not allowed to watch it because I live in New Zealand :( Shame on Dave (the channel) for denying me the enjoyment of watching Dave (yourself).

Genuine question for the "should not ever have been asked category" found on Yahoo Answers.

I could not make that up, and it has been scarred onto my memory ever since being encountered.

@Chris Brown: it's a strange world out there. Don't delve too far, you can easily get lost.

Dave, to resort to cliché
"It's too late for me, but you can still save yourself!"

I would like the news to tell me what's in a speech after it's given. Not before. Media and politicians at fault for that one. Similarly swap speculation before an event for analysis and comment after it. When something is actually known.
But then, I still hope that Christmas will come in December. And only December.

Whoops! The years have started to blur together now I live in Edinburgh. Excellent to see you touring again in 2014!

Loved the opening show: clever, organic, and oh so right. Best disappear before I hit secret spoilers about last night's show: will be catching up later!