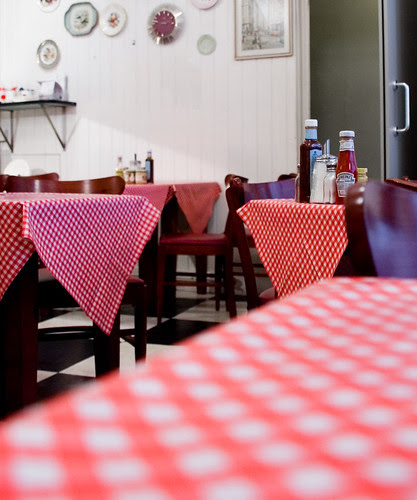 Just looking at that picture makes me want to order a full English breakfast!

Love the random plates displayed on the back wall!

I have had quite enough of your sauce, sir.

Can I tell you something, David Gorman?

You have a problem.
You can't tell your good and bad pictures apart.
The simple fact that you are so prolific in your flickr uploading is an instant give away.

Do you constantly have something interesting to say? I doubt it. Then what makes you think that you constantly take pictures worth viewing?
And, please, none of that "a good pic for you is a bad pic for me" etc... I'm basing my argument on the QUANTITY of pics you upload.

Thanks for every thing, Dave Gorman, I'm a really big fan, you know? You know.

What makes you think I'm constantly posting pictures because I think everyone will find them interesting?

Some are experiments gone wrong. But I find that interesting and people's comments on those can help me to learn.

Some are just memories for me. I don't expect them to be of any particular interest to other people but they remind me of my travels or whatever. For instance today I uploaded some photos from last October because I've been writing about the place featured in the photos. I could look through the photos on my hard drive but a file name in amongst thousands of similar file names isn't as easy to locate as a photo with tags on a searchable website.

Flickr is many different things to many different people. Does every holiday snap on there have no value if it's only intended to be a holiday snap? Is everyone who posts on flickr held to this standard where every image they post is supposed to deliver the goods for an audience?

I think I'm able to tell the good from the bad... I just don't have a problem with some bad photos being on there.

By the way... in the month of August you posted just as many photos on your blog as I uploaded to flickr... although I'm sure there's a good reason why this quantity/quality rule doesn't apply to you.

Some are experiments gone wrong. But I find that interesting and people's comments on those can help me to learn.
Good point, hadn't thought of that.

I think I'm able to tell the good from the bad... I just don't have a problem with some bad photos being on there.
Mmm...ok. I guess we do have a different approach to Flickr.
I think that every time you post a pic it's like tapping someone on the shoulder and telling them "Hey, there's this thing I wanna tell you, listen to me for a second..." And then you go and tell them a joke which you know isn't funny (bad picture).

in the month of August you posted just as many photos on your blog as I uploaded to flickr... although I'm sure there's a good reason why this quantity/quality rule doesn't apply to you.
Aw, come on. You're pulling a "Dr. Gish" here. (sorry people who haven't yet seen the Googlewhack Adventure)
My blog is for my friends! Friends are supposed to be bored blind by holiday pics of other friends.
But I've been a Flickr member one month longer than you and have posted 137 pics, you, 2100+.
But this is NOT supposed to be a "do it like me" sermon!

I'm just letting you know that the choice of pics you upload to flickr, sometimes, puzzles me. And I thought I'd let you know - if even just to give you the chance to dismiss this thought as nonsense.

Don't take it bad, Dave Gorman, I like you a lot.

I'm not taking it bad(ly)... I just don't agree with your point of view.

Nor am I "pulling a Dr. Gish"... although I think this reveals the source of your confusion.

You say, "My blog is for my friends! Friends are supposed to be bored blind by holiday pics of other friends" and the suggestion appears to be that while your blog is for your friends, my flickr pages must meet some higher standard as they are for an audience.

Are they? Who decided that? Why assume that my flickr pages are aimed at you? Or anyone? Why when I post a photo is it equivalent to tapping you on the shoulder? I haven't sent you an e-mail asking you to look at them. It's not me tapping on your shoulder, it's more you looking over mine.

Presumably you're assuming my flickr pages are some extension of my working life when I see them as quite the opposite and enjoy flickr all the more for that.

Fair enough, I get your point. Thanks for the replies.
See you around the cyber-space.

p.s. Did I really write "take it bad"!? I can only blame "Hey Jude" for such appalling language.

wow this is so cool you can argue with a B (C?) list celebrity on his own blog.
i like the picture, it seems to be from the point of view of a head resting on the table, blurry eyed, on a saturday morning recuperating from a vary lairy night.

Actually, I don't consider myself to be a 'celebrity' of any kind and find the concept of celebrity confusing and vaguely distasteful. Insomuch as it exists, it is surely in the eye of the beholder and I think anyone who sees it in themself is on quite possibly mad.

Maybe this is the problem... matan thinks different rules apply to the two of us because his blog is "only for his friends" while my flickr account is wrongly assumed to be for an audience.

No Dave, my flickr account is for an audience too.It is intrinsically public, to me. I'd like as many people as possible to see it. Unlike my blog.

And every time I post a pic I'm implicitly asking you to view it, because I think/hope you might get something out of it, which gratifies me.

This argument, however, is completely defused in the instant you say you approach your Flickr account differently, which I have to accept. You even hint that it's a way for you to search amongst your own pictures. I didn't make that assumption, honestly.

I guess this is my twisted way of giving you feedback, which I imagine you like, as a general rule - am I making another wrong assumption?

I shall now revert to commenting your pictures, from time to time.

I guess you won't be appearing on Celebrity Big Brother if it ever comes back then Dave?

Actually that's a weird thought - having you down as a very low-BS-threshold type of chap I could never understand you liking BB in the first place. Your comments re celebrity confuse me even further! What do you see in it?

At nearly half way through Googlewhack Adventure, I am just starting to discover the wonder that is Dave Gorman! Hurrah!

And a photographer, to boot!

"Ketchup" is a work of unmitigated genius... wonderfully, iconically British. The juxtapositional tension between the red of the tablecloth and that of the ketchup bottle, which is nestled tightly amongst its companions, in what can almost be described as a Group Condimentary Hug, induces feelings of nostalgic inner warmth. And yet there is a wistful sense of loneliness, due to the lack of customers and the almost blurily unnoticed brown sauce bottle at the back - which is technically in an identical category to that in the foreground, and yet its positioning renders it virtually anonymous - the whole tableux serving as a symbolic metaphor of celebrity culture.

I don't really look at the photo's.