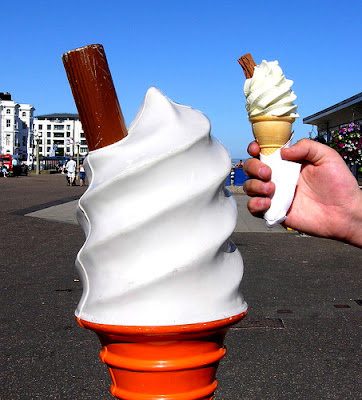 There are certain things that I haven't done that I enjoy telling people I haven't done because people seem so shocked. For example... "I've never taken a holiday."

This is true. Kind of. I went on holiday when I was a kid, obviously, but in my adult life I've never actually gone away for a week's break. I've done the odd weekend away and I've travelled a lot with work and I've gone awol with a break down... but not a break.

Now obviously, doing a run at the Melbourne Comedy Festival, say, equates pretty closely to a kick arse holiday but that's just spoiling a fact with, um, another fact.

Most of the things I enjoy telling people I've never done fall in the pop-culture category. The things that people assume everyone has done. I've never read any Harry Potter or seen any of the movies... which is even more fun to reveal to people if I also get the opportunity to slip in that I have met JK Rowling. (Edinburgh 2001, she was lovely.) Similarly I've never seen or read anything of the whole Lord of the Rings hoo ha... although I have never met JR Tolkien.

I've never seen an episode of The Sopranos, The West Wing, 24, Lost, 6 Feet Under, Deadwood, House or Desperate Housewives. Which I know is nonsensical especially when you consider that yesterday, while gearing up to start writing, I watched a whole episode of Car Booty with Lorne Spicer. (She wasn't watching it with me, she was in it.)

In the episode a family put loads of their stuff into a car boot sale in order to raise some spending money for a holiday they were taking to Morocco. They raised the sum total of £36. Thirty six pounds! That's it. Just over a pound for every minute of the resulting show. Thirty six measly sodding pounds! To spend in Morocco!

I've been to Morocco. Twice. Lovely holidays. I was a child at the time so it doesn't count.
Posted by Dave Gorman at 11:32 AM

But if you did go on holiday.... would it then become the basis for work?

In which case, was it a holiday or research??

Oh life is too hard to think about

I know what you mean - I take great pride in having reached the age of 30 without once having been to the hairdressers. (And I'm a girl, which I think makes it more of an achievement... if not doing something can really be described as an achievement.)

The only downside is that, having made it this far, I somehow feel I ought to go the distance - as if getting my hair cut by someone who isn't me and has some vague idea of the technicalities involved would be cheating. "No!" I shout*, whenever the idea of having a hairdo that doesn't look like a load of mouse tails hanging off my head is mooted, "Resist! You can make it to 40!" If, as and when I ever do get my hair cut it'll be something of a bittersweet experience.

*(Not out loud. That would just be weird.)

I've never consciously come up with a list of things I've never done.

I never watched 'Titanic' and I've never been drunk. I have a feeling those two activities would need to go hand in hand.

I'm going on my first proper holiday as an adult that involved taking annual leave from work next week. I'll let you know if 'going on holiday' is all it's cracked up to be.

and *I've* never syndicated my own personal communications to my blog and passed it off as original content. Oh, wait...

@emma: I believe Cash in the Attic and Car Booty somehow manage to both be poor man's versions of each other. BBC1's early morning schedule is like an Escher drawing of inferior derivation spiralling ever downwards.

I do enjoy the two contrasting vibraphone themes from C in the A though. Not as much as the abysmal incidental music from Homes Under The Hammer in which a modern day Sapphire & Steel host a show about buying property at auction. The scripts are clearly written around the music... leading to the clunkiest segues.

"Pat moved to Liverpool for love... and now he's ended up buying a plot of land on Moscow Road... so you could say it's a case of from Russia with love... (Cue Matt Monro.)

Well yes, you could say that but it would bear no relation to any of the facts involved in the story would it?

"There's no lift in this block and the flat is on the top floor so for this young couple, the only way is up!" (cue Yazz)

I get a little frustrated that I'd be in the same boat as you Dave, if it weren't for other people and/or their "amazing" recommendations. I've seen so many single/one-off episodes of all this rubbish, (24, Lost, Eastenders, Emmerdale, all soaps, Ugly Betty, Desperate Housewives...).

As much as I feel a little dirty when I've subjected myself to such things, it does help that I've actually seen them and so I have a leg to stand on when I'm slagging them off.

Also, I feel like the only 20-something on the planet who doesn't own a copy of Nevermind by Nirvana.

I've been to two foreign countries in the past ten years. I went to France once, in 1998, and I was there for two hours which was largely spent sat in the back of a car while my Uncle Dave bought cheap booze to take back to the UK. I then went to Los Angeles for three months in 1999, and two more weeks in 2005. I like it so much I moved there just over a month ago.

I did spend one week in Hemsby with my now-ex girlfriend, though. Twice. In the space of four months. We got in an argument because I stood next to an Elvis impersonator in a photo and she had wanted to be next to him. Good times.

Didn't you use some cheesy daytime TV show's theme tune in one of the DGIAE episodes?

Ive never seen Grease, but I have seen Grease 2, and Ive seen many different types of Geese.

@olly: yes... although we didn't know it at the time. We just wanted some generic music in the style of so we plucked a library CD from the shelf and found something which was very, very daytime. Then a few months later I caught an episode of Bargain Hunt and heard the same piece of library music... which I suppose goes to show how good for the job it was.

Dave, you'll watch Car Booty and Big Brother, but not the Sopranos or The West Wing? WTF?! Go get Sopranos season 1 box set... trust me.

Reading this has made me realise I've not been on holiday since I was 7. going to center parcs for a long weekend doesn't count. nor does 4 months in New Zealand as an au pair.

I am currently "holidaying at home". It's Edinburgh, it's the festival - that counts as a holiday, right?

I've never watched any of The Godfather films. There's loads of stuff I've never done that makes people go "are you kidding?" when I tell them but I'm having a dull brain moment and that's the only one I can remember.

Of Dave's original list of TV progs I do watch House (I was interested to see what Hugh Laurie would be like and it went from there), but couldn't tell you a sausage about any of the others. (Not even a chipolata.)

i am pleased to say that i am the same as dave . i lot of things he has'nt done i have'nt done ( i am not copying him on purpose honest !)

i have not watched any of the last 3 big brothers . sorry dave i hate the show . it is mind rotting and belive me i don;t have much of a mind left to let rot by watching it!

dave if you ever read this you made a lot of trips for your books are you dave gorman and the googlewack adventure . ( i don't mean the comedy show tours i mean trips that featured in the books ) i suppose they would count more as work then plasure ?
peace
Linda

If you ever find yourself again watching morning TV, Dave, you should watch Homes Under The Hammer. It's addictive. Unfortunately it clashes with Jeremy Kyle...

And Sopranos is awful.

What you mean to say, Dave, is that you've successfully gotten all your holidays written off by the taxman, yes?

"BBC1's early morning schedule is like an Escher drawing of inferior derivation spiraling ever downwards."
Haha, I've never considered BBC morning telly to be comparable to Escher. But now you say it, it's clearly what he had in his mind when he drew Ascending and Descending. Obviously it all breaks free when Neighbours comes on.

I'm actually watching today's episode of 'Car Booty' now with an almost violent dislike.It should be called "Let us find all the decent/valuable/interesting heirlooms in your house and get sell them for you at a lower price than we initially got your hopes up for so you only have total tat left to leave to pass on to your loved ones and all so that you can have a lovely girly afternoon out on a boat."

Que?! (Okay.... I may be incorporating my views of other similar programmes like "cash in the attic" there, but I'm having a bad day, so hopefully you'll forgive me!)

It would be more fun if they took the tat out of the house and flogged it to unsuspecting plonkers and called it "HAHA - you suckers!"

*Switches over to catch the end of This Morning*

I was just thinking today that I've never taken a week's break.

How random. (And how depressing.)

I can highly recommend 'The West Wing' - though it does tend to US uber-patriotism on occasion, it's generally so good that this can be overlooked. I would suggest giving yourself a limit to how quickly you watch them, should you choose to, as you'll burn through them quickly otherwise.

The opening of season 1 is phenomenal, a tracking shot through the entire whitehouse following Leo on his way to the office - I wonder how many takes it must have taken them! It lays out the stall that says 'quality'. Bartlet's entrance (Sheen) is just great too.

The Sopranos is another great series. Not much actually happens in your average episode, it's quite soap-operatic, but it's cool to just hang out with the characters.

Both series have now reached their ends. For current series, I can recommend 'Battlestar Galactica' (the remake) - the pilot film and season 1 is available for a good price now on dvd. They've broadcast three seasons already.

I like '24', but it can be a bit strained at times - the series has been too focussed on Jack Bauer for my liking (it should have been broader), also, some happenings can be 'filler', probably best exemplified by the Cougar in series 1. That said, it really is well constructed TV - and it does work better on TV for me. On DVD, the clock jumps forward by a few minutes where the ad break used to be - I think the series works better by hitting pause at these points and making some tea!

If I'd choose only one of these, I'd choose the West Wing every time.

The writer, Aaron Sorkin, has a series called 'Studio 60 on the Sunset Strip' on More 4 or E4 or one of those - basically set behind the scenes on a US comedy show.
It's a great series, which unfortunately only got one series made, It stars Bradley Whitford and Matthew Perry.

He also did 'Sports Night' (with Felicity Huffman) - which was much better once they got rid of the canned laughter.