You know what it's like when you're not really concentrating on the TV, there's an ad break and you look up and think, I know that face. Where have I seen that face before.

Well it just happened. It was an Argos ad. I got so spooked I even picked up the remote control and rewound the television and paused it on the face in question. (It still freaks me out that you can do that)

I took a photo. Here it is: 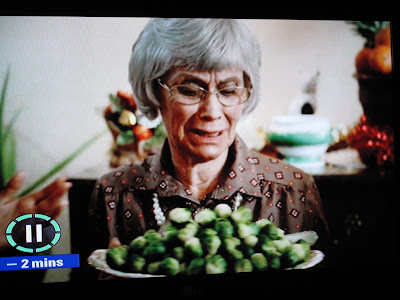 Look, here she is: 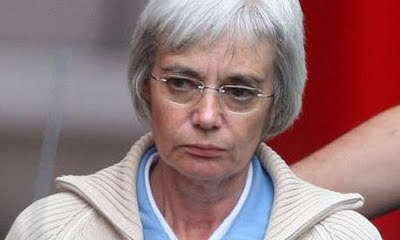 Well, I knew she'd been ordered to pay the money back, but I didn't imagine a bit part in an Argos ad would pay that much.
Posted by Dave Gorman at 9:37 PM

That's pretty cool Dave - she must be in a open prison as, according to the oracle of Wikipedia: "On 23 July 2008, John Darwin and Anne Darwin were both convicted of fraud. John Darwin faced an additional charge relating to his fake passport and was sentenced to six years and three months in jail. Anne Darwin, who was described by the police as a compulsive liar, was sentenced to six years and six months. Both Darwins appealed against their sentences and on 27 March 2009, both appeals were denied by the Court of Appeals". So I'm guessing she's still in there ...
And I've tried to rewind our TV but it doesn't seem to work ...

Hmm, I think DG is just using his blog to do a bit of viral marketing.

Argos and Homebase are owned by the same company, and a while back Dave was doing some voiceover work for the Homebase TV ads...

Maybe she's being force fed brussel sprouts and then being sentenced to go to Argos at christmas as some kind of cruel and unusual punishement...

I like to imagine I'm a time-lord when I rewind the telly...

I am also the master-of-30. Except sometimes channel five can slip me up with it's false advert-break endings.

I know what you mean, I felt this very same feeling when seeing
Kim woodburn on I'm a celebrity and thinking
http://www.channel4.com/entertainment/tv/microsites/T/tonightly/images/episode12/1.jpg

No more "I recognise him- what was he in?"