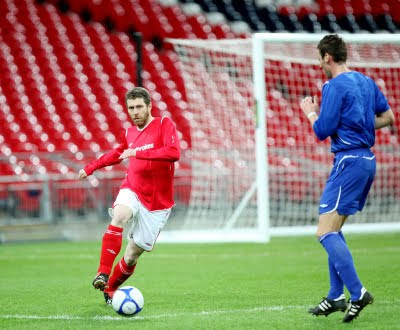 Sometimes life is just too ridiculous for words. These photos were taken at Wembley Stadium. 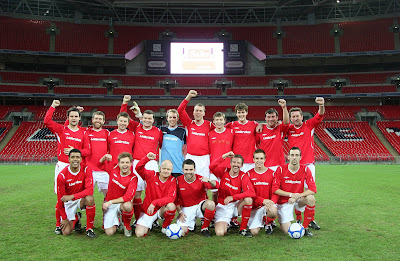 It was a charity event - a match played against a team of soldiers - for Help for Heroes. The spine of our team was pretty damn good.
Ralf Little and Chris Kamara were able to control the midfield in the first half. In the second half, the soldiers superior fitness showed.

I was more of an agricultural right back who's not really agricultural enough but not cultured enough to be called anything else. I did make the assistant referee say, "Oh, well done" once though. That's plenty enough for me.

And in case you've forgotten... it's Wembley. The stuff of dreams.

You can find out more about Help For Heroes here.

You can see The Sun's report on the event here.

Big thanks to The Sun snapper for letting me use these photos.
Posted by Dave Gorman at 1:20 PM

Wow! What an impresive line-up!

Will the game be televised?

It wasn't filmed for TV, no. There's some footage on The Sun's website - see the link I've just added to the post.

Wow! Ralf Little's semi-pro isn't he? Or at least he has been. Has this sparked a desire to join the England squad with a cheering crowd behind you? :)

How did you lose with 17 players in your team?

We didn't lose. It was a two all draw.

In fact (puts on biased sportsman's hat) we had a perfectly good goal disallowed in the first half so technically we should have won. But who wants to spoil a hero's day?

If they'd had their shooting boots on they should have scored at least four in the second half but they put most of their opportunities over the bar. As a defender, my role as they turned away having skied another one was to turn to my colleague and say, "I think I did enough to put him off"

We had rolling subs - which this particular unfit lump was very grateful for and two of our side were soldiers as well because we were lighter in numbers than them and everyone wanted to get a decent run out.

Despite my ineffectiveness as a player I will say this... we conceded two goals... but I wasn't on the pitch at the time. It was a clean sheet on my watch, a clean sheet yes sirree.

That's a seriously impressive photo of you playing there, Dave. If that was me, I'd frame it.

"We had rolling subs - which this particular unfit lump was very grateful for..."

Hold on! Aren't you the "unfit lump" who's just cycled around the UK? I'd suggest that puts you in a category of endurance and stamina. You're obviously saying that because you didn't want to embarrass your team mates and as you said to make sure everyone got a run out, aren't you?

@stuart: You'd be amazed at how much fitness a man can lose in a month.

As it goes I found my legs felt fine... but my lungs didn't find it quite so easy. There's a different intensity to this kind of exercise and I was gasping.

Did I see you on Sunday? At Bethnal Green Tube Station...? I was the weird Red Headed girl in a white hat saying to my friend 'I think that is Dave Gorman' whilst going up on the escalators...

Blimey Dave - boyhood dream achieved for you! No more piles of jumpers as goals for you - did you have Roy of the Rovers up front and Billy the fish in goal?