And Tenuousness by Andrew Bird... a song I'd discovered on the soundtrack of a film on my flight home from Oz:


The show was spent discussing those magical moments when cliches come to life. I'm amazed at the number of people who've actually slipped on a banana skin... and am now convinced that swans really can break your arm. But it's the butcher running down the street after a dog with a joint of meat in its mouth that lives longest in my imagination. What would he have done if he'd caught the dog? Retrieve the meat and sell it?

There's all of that, plus Ward's Weekly Word, a man hammering a nail into his own head (video) and a Found Poem on the podcast... plus all the usual podcast extras. If you use itunes, you'll find it here and if you don't... well, we thought about you too, it's here.

Oh... talking of Pun Street - and I was, sort of - at the start of April we added Lord of the Fries to the street and as it's based in Melbourne I promised I'd take photographic evidence on my trip. I did. Here it is: 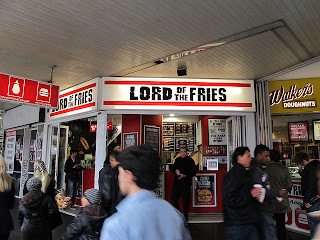