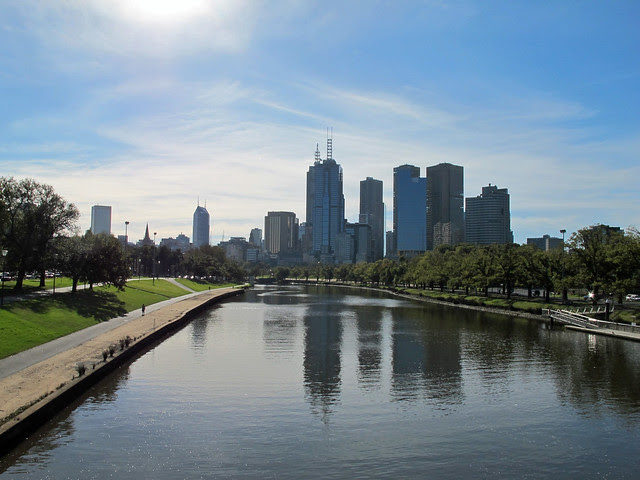 I'm sorry to be leaving this place. Two weeks really isn't enough for a trip down under. But I've had a blast. I'm proud of the run. The shows sold out and I was nominated for an award I didn't think I was eligible for. That makes for a pretty fine holiday. (Congrats to Doctor Brown for winning the Barry by the way - I'm glad it went to someone doing a brand new show rather than an Edinburgh import)

I saw some great shows by others - so much overlapped with me that it was impossible to see everything I wanted but I loved Sam Simmons, Celia Pacquola and Sammy J & Randy.

I was last here in 2004. The eight year gap wasn't down to me cocking a snook at Melbourne. It's just that I wasn't doing any live shows for most of it.

I dipped my toe back in the live waters in 2009 with a show that wasn't festival friendly. There was no way of doing it without two long halves, separated by an interval. That would involve taking over a venue for pretty much the whole night... and festivals don't work like that. So really, this show is the first thing I've done that could have come to Melbourne... and I've brought it at the first opportunity.

But I don't think it'll be another eight years before I come back. I stopped doing live stuff because it had stopped being exciting to me. And I started doing it again because I started to feel that excitement again. And I still feel it.

I don't know when I'll come up with a new show - I'm touring this one til July 7 as it is - but I will - and when I do... I really, really hope that Melbourne will have me back.

Come back as soon as possible. Five years was of long a break and as much as I love the pod cast it just doesn't compare to seeing you live. Mind you my eventual success of getting onto pun street is one of my top five life achievements!

What did you feel you had lost to stop you doing live stand up?

@Johngledson: it stopped being fun. If it's not fun to do, there's really no point doing it. It's fun again now.