We all dream of a team of Phil Neals 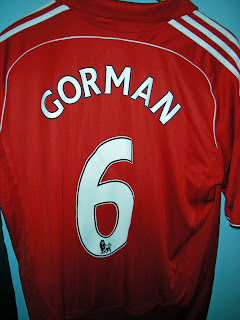 Because of late changes to our team we had Liverpool legends Ray Houghton and Jason McAteer in the side as well, but while Phil Neal and Bob Bolder were with us for the whole day, they turned up later. Playing 20 minutes in their company was a heightened experience. A rare pleasure.

There's something about watching people with so much ability up close. They ooze quality. They do difficult things with ease and they think faster.

In spite of the way it ended, Tuesday has to rank right up there as one of the most enjoyable days of my life. Phil Neal and Bob Bolder were with us from the start and were so good at taking the 6 amateurs under their wings and sharing their knowledge. Meeting heroes is a dangerous game. They can disappoint. Illusions can be shattered. That didn't happen. Phil Neal exceeded my every expectation. I can't remember meeting a more inspiring and invigorating person. Nobody who was involved in the day has achieved more than him (8 League Championships, 4 European Cups) and yet nobody involved gave more of themselves. A true honour. At the end of the day, I nicked his captain's armband. We all want souvenirs.

There are two matches each day. The first of which kicks off at 8pm. Because of the filming the day is long and there are several hours after the coaching and before the kick off where there's really nothing to do. The production team warned us that the day could be boring and recommended that we didn't stay around the Academy. But after our coaching session we decided we didn't want to go our separate ways. We wanted to hang out together. We wanted to be a team. And so we did just that. And it wasn't boring.

And nor was the game. 3-1 down at half time, we summoned the spirit of Istanbul, dug in and came back to 3-3. The tournament has a vaguely complicated structure which I won't bother to explain, suffice to say that we didn't just need to win to get through to the quarter finals... we needed to win by two goals.

This being a TV show they have a few changes to the rules all of which are intended to keep the action going and encourage attacking play. In the final minute of each half they have a powerplay... during which, all goals count twice. So, in the 20th minute, we were needing to score one goal to take a two goal advantage and put us through to the next round. We had two great scoring opportunities, but the ball didn't find the net and the game ended in a draw... meaning that both teams failed to get through. We were devastated. I really wish we were going back for another match on Friday. But we're not. I'd do it all again at the drop of a hat.
Posted by Dave Gorman at 1:11 AM

It might be a blessing is disguise that your not playing on Friday! What with the squad rotation you could find yourself in the first team to face Wigan.

And it will give you more time on the book.

Still gutting, though, I imagine.

Personally I dream of playing football with Euan Blair. But only because I'm looking for a cheap flat in Bristol.

Was a great watch - classic stuff seeing Macca getting all wound up again, even if I was a bit scared by Blair jnrs facial hair.

I had no idea there was a real thing called powerplay. When my brother and I have 5 minutes left on the badminton court I shout "Powerplay!!!" and we just play in a manic, attacking way. The more jumps and sprints the better. This slightly takes away from my brilliant idea.