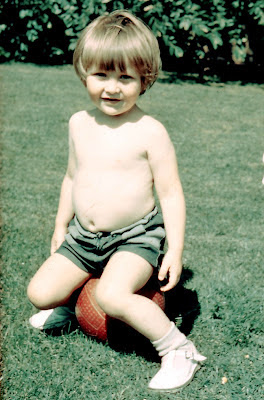 Every now and then offers come in that are simply too good to be true... and here's one of them. On Tuesday, I'll be playing football in a Sky TV tournament called Premier League All Stars.

It's a 7-a-side tournament which mixes up ex-pros, members of the public and, ahem, so-called celebrity fans. I always find the word "celebrity" vaguely uncomfortable but not to the extent that I'd turn down the opportunity to play football for the team I support... especially when there are some former players in the same side.

I'm a Liverpool fan and I know the ex-pros in the 10 man squad will include Gary McAllister and Jamie Redknapp. How ridiculous is the world? Criminy, I've just realised that Gary McAllister was winning trophies with Liverpool when he was the age I am now... which makes my lack of fitness all the more embarrassing. (As you can see, I had the belly and the ball control when I was a bairn... nowadays it's just the belly.)

Also pulling on the Liverpool jersey will be Radio 1's Colin Murray and son-of-a-former-Prime-Minister, Euan Blair who at least has youth on his side. I read a press release for the show somewhere and the names I saw playing for some of the other teams were a bit intimidating; Mark Ramprakash for Arsenal, Martin Offiah for Wigan and Jonathan Edwards for Newcastle for example. So that's a cricketer, a rugby player and an athlete... while we're a pretentious comic, a disc-jockey and Tony Blair's son. Hmmm. Could be interesting.

Anyway... we're playing Derby on Tuesday night and I'll be popping up on soccer am on Saturday morning alongside the lovely, funny (and surprisingly skilful midfield wizard) Omid Djalili.
Posted by Dave Gorman at 2:02 PM

Awww- mini-Gorman. I'll just say it before anyone else does.

Is that tomorrow on Soccer AM, or next Saturday? (Promo or post-match dissection?)

P.S. Why did all kids in the 70s and 80s have the same haircuts? Regardless of sex, normally. Did they teach it to new Mums in maternity wards, d'ya think?

It's tomorrow's Soccer Am - and we can't wait!

The Soccer Am Team. x

You haven't always had a beard, then?

I think you are being stalked by the Soccer AM team. They seem a little too excited just for professional interest. Not that you aren't exciting, but you'd think they'd be used to this kind of thing.

Who the heck have Derby found to play for them!? the only fan I knew of was Tosh from the Bill who is sadly dead. Still Come On The Rams!!! :p (oh and best of luck to you too Dave - hehe)

I believe Derby have got Dominic Cork... so that's another team fielding another sportsman, then.

There's a little video of Dave up on the Soccer AM site, can anybody else get it to work?

Hmmm, all this time I've been watching you perform and reading your books and website...I never realised that you were a fellow Liverpool supporter. Of course I saw Steven Gerrard listed as one of your heros on your MySpace page, but I just assumed that everyone listed him...given that he is a bona fide Hero! By the way, how are East Fife doing?

Just watched the match now... very entertaining. Although slightly disappointed in Dave being a Scouser, naturally.