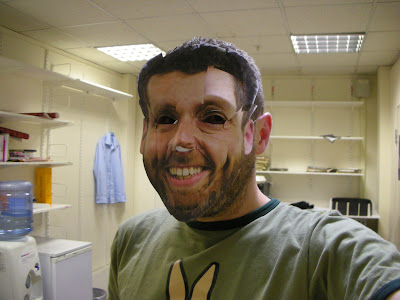 Hmmm. I'm having a bit of a problem with a fake me on facebook. I've been getting a lot of mail from people who've been taken in by him... and I don't like it.

(I also don't like how hard facebook have made it to report... and how slow they are at reacting...)

I have a website. (I know... you know.) Given that I have a website, what are the chances of me having a facebook profile or a Myspace profile and not linking to them? Pretty slim I'd have thought.

Which is how you can verify that this is my facebook profile and that this isn't. That second link has got nothing to do with me. Unless you're listed as his friend (or you're in the Brighton and Hove network) you won't be able to see his page. But he's using my photo, my name and my biographical details and basically trying to pass himself off as me. Which is kind of unsettling to begin with... but is made worse by what he then does as "me."

One of them is called Gormans Idea Group.

He introduces the group saying "A group for my friends and fans to post any ideas they may have, for new books or tv programmes for me to write, as i am suffering from serious writers block at the moment.... lol."

Agggghhh. Leaving aside the whole people-might-think-I'm-begging-for-ideas thing... there's also the fact that he thinks I'd use a lower case i and a lol. Lord help me. I don't lol. I often laugh out loud. But if I ever want to tell someone that I've laughed out loud... I don't lol.

His other group is just as bad. It's called Googlewhack Fan Club. My skin crawls even as I read the words. In his introduction he writes, "Been a while since i did the googlewhack series, thought i'd give my friends a chance to post their own. When i get chance i'll check them and post the results. maybe devise a leaderboard or something - DG....."

Where do I start? Googlewhack series? Well there's your proof that it's not me writing those words right there. What series would that be? There wasn't one. There was a stage show and a book. The stage show was filmed and is available on DVD. But there's no series. Then there's that lower case i again. And again. And again. And the idea that I'd encourage people to try and googlewhack... or even go near the game again myself. Ugh. Shudder.

I've written to facebook and asked them to remove him but they don't make it easy to report these things and they're being very slow in responding. Far slower than Myspace have been when similar things have occurred over there. If you're a contact of the fake me... or you're in the Brighton and Hove network and can therefore view his profile, why not take the time to click on the 'report this person' link that should be there towards the bottom left hand corner? Or e-mail him... gorman1@live.co.uk and ask him to kindly stop...

Plenty of other people calling themselves Dave Gorman though. Wonder how many of them you've met.

Although facebook look like they've removed the offending erson, did they bother to let you know they'd done it?

They did write to tell me they'd "removed the offending content"... which wasn't quite true. The groups he'd created were still there. They're gone now... but only because I went to the slightly surreal trouble of making myself an administrator of them both and then nuking them...

I'd create a fan page Dave, good for sending out updates and people you don't know can 'sort of' become your friend without you having to read tons of their status updates, sheep throwing etc.

1) How to set up your very own Facebook Page

In order to get more support for your REAL celebrity page, it would be a GREAT idea to set up your own REAL DAVE GORMAN Facebook Page. You can get HUNDREDS AND THOUSANDS of members within the Facebook network since there are no limits unlike Facebook Profile or Groups where the cap for both has been set at 5000 members.

Here’s how you can set up the Facebook page for YOUR real Page:

2. Once you have created your basic Facebook Page jazz it up with these tips

Invite friends to become fans of the page

When someone becomes a ‘Fan’ of your Page, this immediately pushes their fan status to the newsfeeds of all their friends.

Tell them you are building a REAL DAVE GORMAN and would love their participation.

To give you a good example on what we’re talking about, please check out this Facebook Page example I made for a charity I support for Soft Power Education: http://snipurl.com/jinja

One of the most effective ways to drive traffic to your Facebook Page is to send out emails to your contact list of Blog recipients – they may be individuals or groups. The email should be persuasive and can be sent to prospective individuals or the admin officer/creator of a relevant Facebook group/page.

Here are other great ways to generate traffic to your Facebook page:

Link to own blog site

Writing articles can DEFINITELY provide your Facebook Page very valuable traffic. Remember, the higher traffic, the higher chances for people to see your page and see the REAL DAVE GORMAN!

There’s a limit of 5000 members on your Facebook group. However, on Facebook pages you can get literally THOUSANDS UPON THOUSANDS of prospective fans!

Do you already have a REAL Dave Gorman Facebook Group? If so you can transfer the database from your existing Facebook Group to a Facebook Page.

Facebook administrators can easily convert your Facebook Group into a Page provided that your group site fits into the categories that are offered for Pages.

Fill out a request on this link: www.new.facebook.com/help/contact_generic.php

You definitely don’t want your Facebook account to be flagged for spamming. It may take several weeks before your account is reinstated or worse, it will have a lifetime ban which leaves you no choice to but to create another one.

It is therefore recommended that you do the following:

LIMIT your seeding up to TEN email-invitations per day.

Avoid sending messages with the same content all the time. Rephrase or come up with new email formats from time to time in order to avoid being flagged for spamming.

Facebook has provided several alternatives for you to advertise your group. You can use Event updates, Social Ads, Marketplace Listings and Status updates

You can increase the VISIBILITY of your Facebook Page by setting up Notes on your page, comment on Birthday Celebrants, comment on Videos and Photos uploaded by your friends and update your status from time to time.

6. How to take advantage of third party applications on your Facebook campaign

There are thousands of third party applications that you can choose from and place it on your Facebook Page. However, marketing experts agree that you need to create something of value to your users and maintain a clear consistent appearance. This means that you have to choose applications that are useful to your REAL DAVE GORMAN campaign.

In your profile, add “Looking for Networking” in order to inform everyone your intentions.

Only upload photos and videos that are relevant to your cause. This shows consistency on your group’s objectives.

Here are some of the applications that you can add to your page: My Box, Top Friends, Profile Web Address, Business Cards, Free Conference Calls, KickIt and Friends CSV.

Facebook currently has millions of members and thousands of page sites. A new member or a new page gets created in just a matter of minutes. This poses a challenge on how you can maintain interest on your Facebook Page. You have to make sure that the members are aware of the REAL you. Here are some things you can do:

Write on walls of individual members, groups and pages. Come up with statements that won’t be construed as SPAM.

Update your page regularly. Post a new blog entry on your page. This update will register within your network.

Create an event and create a time frame as well. Invite as many friends as possible.

These are just some of the things that you can do. I have many more Facebook Marketing free tips, just email me!!

PS. I am speaking at Google next week, I'll whack em for you personally! If you want to whack Facebook try my contact in the London office Mark Cowan (mcowan@facebook.com),it's all good PR for them once they sort it out

I wouldn't touch Facebook with a ten foot pole. I have heard too many horror stories about privacy issues concerning personal information that they collect and what they are allowed to do with it. You sign off on a lot of stuff when you sign up. I am not surprised that they were slow to respond.

I've seen countless fake 'celebrity' profiles on facebook, even ones for fictional characters etc etc.. But I've never seen one that purports to be the real celebrity (to my knowledge at least)..

This is quite odd and steps beyond the point of celebrating someone you admire..

Congrats on getting rid of the scoundrel..

Slightly ironic. All that advice about facebook but Sara can't seem to spell her own website address correctly....

Seems you're not alone: http://www.wherediditallgoright.com/BLOG/2008/08/i-hate-facebook.html

More than a little unsettling when you discover that not only has someone stolen your identity, but they're using chat acronyms and lower case 'I's! Your true fans, surely, will realise you'd never stoop to such levels!

Coincidentally, yesterday I had a two hour chat with my friend who's a Facebook Avoider (I know three), discussing the privacy implications of the site (which have always intrigued me). It's when all the data scattered across multiple sites gets aggregated that the trouble begins...

The thing I find most terrying about this is your illustration. Three ears and no eyeballs is far more terrying than stolen identity.

PS. I don't know terrying is, but it still stands.

That is the most freakish freaky picture of you there Dave... is that mask going to be available in next month's Select?

And that is some very poor pretending to be you by that facebook fool. School boy errors, all the way.

Just a shame Facebook never responded in the comments on your blog - I guess they feel they are either too big or have too many people flaming them to keep up :)