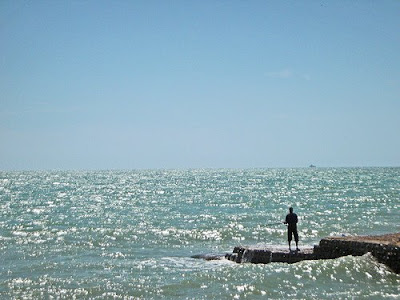 I did some stand-up for the first time in nearly 8 years last night.

I mentioned a few days ago that I'm trying to work out how to get back into some kind of live performance... but that I'm not sure what form it should take.

The thing is, I gave up stand-up for what seemed to be very good reasons at the time. The landscape has changed a bit these days. Somebody has coined the phrase 'documentary comedy', giving a name to the genre*. Each year at the Fringe there are maybe a dozen shows tagged with the phrase and audiences turn up to see them without questioning what the format will be.
*Or maybe they're just pretending that the age old art of story-telling is some kind of new genre by coming up with a new name for it. Either way, the effect is the same.

When I first did Reasons To Be Cheerful at the Edinburgh Fringe in 1998, audiences were confused about what to expect. There would often be some awkwardness at the start of the show as it dawned on them that they weren't watching the stand-up show they were perhaps expecting. People simply didn't believe that I really was going to spend the whole show discussing one subject, without jokes, and that it would be funny. Luckily, on most occasions, most people were won over eventually. (As those who saw it will know, I've got the marbles to prove it.)

Of course it makes sense that audiences were expecting a stand-up show: I'd done stand-up shows at the festival for a few years running. I was a stand-up comic. And there wasn't really another kind of show for them to expect it to be.

The night I finally decided to knock stand-up on the head came after a gig at The Meccano Club in Islington. I'd just finished a ten-show run of Are You Dave Gorman? in the West End. I was really proud of the show. It hadn't been on TV yet but word of mouth meant I'd managed some respectable ticket sales in a proper West End theatre. It was really exciting and I was convinced it was the best show I'd done thus far.

Then a week or so after the run had ended I was booked for a thirty minute set at The Meccano. It went well although most of the material in the show was more than three years old. At the end this nice young couple came up to me.
"It was really good to see you tonight," said she, "We wanted to come and see you in the West End but we couldn't get a baby sitter. But it doesn't matter because we've seen you now."

So, while I left my arse unchurled, I did decide there and then that if audiences were going to see me once and make their minds up about me based on that one offering, then I should only make available the work I was proudest of. If people didn't like it, that was fine - so long as enough people did - and it was better than confusing the issue by working in different fields... especially when they appear to be so similar in an I-talk-I-stop-they-laugh way.

I didn't have many stand-up engagements left in my diary... so the next day I called my agent and told him that I wouldn't accept any others. From that point on, the only thing I wanted to be judged on were the one-man shows.

Over the next few years I toured four different stage shows. And over time I definitely noticed that audiences' expectations were changing. When I revived Reasons To Be Cheerful a few years later they were entirely comfortable with the format of the show. There was no awkwardness at the start. The idea that I was there to discuss one subject, to tell one story was no problem. In fact that's what people expected of me.

So part of me thinks that maybe I don't need to draw the line in the sand for myself anymore. If someone saw that I was doing a storytelling show one night, a book reading on another and some stand up the night after that, I think they'd understand that each of those things were going to be fundamentally different in a way that wasn't clear 8 or 9 years ago.

It's probably been true for a while. It's just taken me some time to see through the fog I created for myself. I am stupid.

Anyway... I haven't toured a live show since I came home from my exhausting American tour of Googlewhack Adventure nearly three years ago. And that means I've been starved of audiences. I love doing Genius and that obviously involves a live audience but at six shows a series it's hardly feeding a habit.

When I was doing the book-readings for Googlewhack Adventure they were fun but it didn't possess any great novelty because I'd only just finished touring the UK with the stage show and more overseas touring was just around the corner... so facing an audience was just a normal, everyday thing to do. It's always been something I've enjoyed... but it's only when you don't do it for a while that you realise quite how much fun it is. And that's what I discovered (rediscovered?) when I did the run of book readings for America Unchained. I was really excited to be doing them... and I decided that when the book readings ended I'd try to work out a way of doing something else live instead.

I don't think it would be sensible to try and contrive another big story-telling show. I'm proud of how honest and un-contrived the previous shows have been and think it would inevitably feel a bit lacklustre if I engineered something just so I could do another one. Several people have suggested I create a stage-show out of America Unchained... but I can't see the point in telling people a story they already know and so, with the book and the documentary already out in the wild there's no reason to tell the story another way.

I still don't know what this is all going to lead to. Maybe I'll get back into stand-up properly. Maybe I won't. I just know that sitting around and trying to think of things in the abstract isn't very helpful. The only way of finding out is to go and do something and see how it fits. It'll either provide enough fascination and drive or it won't. Maybe it'll close down some options but maybe it'll open up others. On stage, with an audience to play to (and with) the possibilities become real in a way that they never will when I'm sitting on my sofa muddling my thoughts.

But I'm aware that I've unlearned some of my stand-up ways and it's a form that needs to be respected. So, I'm not going to start hawking myself around as the finished article. So yesterday, I put together a short set - maybe 5 or 6 minutes - and went to a new material night run by some friends.

It went well. I enjoyed it. Things clicked. I was aware that my brain wasn't thinking as fast as it should. I was lucky. Because the audience were going with things I had plenty of thinking time to spare. It didn't matter that I was a bit behind the pace. But if it had been a quiet room - or perhaps if it hadn't been a new material night - where the audience don't expect the performers to be quite so well-oiled and slick - I might have been playing catch up; finding my next move a few moments after it was really needed.

Still it was a worthwhile exercise. And I guess I'll do some more short sets in the next few weeks. Just to loosen my muscles and tighten up some words. I might as well find out.
Posted by Dave Gorman at 3:47 PM

I've never seen you perform stand-up, Dave, but I have been lucky enough to see all of your Documentary comedy live. I, for one, will be looking forward to seeing whatever you do.

Good luck, and you never know, there may be another chocolate raisin in it for you!

That sounds very exciting and scary. Looking forward to seeing your fruits.

That's quite exciting. I remember seeing your Documentary-style stuff a while back, I think it would be interesting to see you in a more straightforward stand-up situation. Good luck!

I've never heard the term 'documentary comedy' before, but it describes the type of comedy that seems to have become the standard for comedians here in Melbourne. It's very rare here to see a comedy show that doesn't have a story or a theme. The more meandering, observational style of stand-up seems to be reserved for fundraisers, corporate gigs and short shows in the comedy festival bar for performers to promote their 'real' show.

It's interesting how this has become the norm and is considered a particularly 'Melbourne' thing, as other countries (and other Australian cities) still have thriving stand-up performers. It's very impressive to be able to do both well.

When I saw you do stand-up 10 years ago, it was a corker of a night. You helped get me together with the most amazing girl who is now my wife. Thank you for getting us to hold hands while you stage-dived on to us. Hero.

Everything about that night was so weird, but you managed to bring it all together (and even bought a round of drinks for everyone). It took skill to do what you did. And be a matchmaker at the same time...

If you can achieve that kind of thing when performing stand-up, it's time you got back to it! Best of luck.

Going by the number of Gorman-esque performers at the Edinburgh Festival this year (I'm looking at you in particular, Mark Allen!), not to mention the weary sniping from people such as Mitchell & Webb (http://uk.youtube.com/watch?v=EC0TDci9hqg), perhaps it is a good time to shift direction, Dave, and keep ahead of the pack.

Smashing! I saw you do stand-up many, many years ago and thoroughly enjoyed it. Your other work is fantastic, but I always thought it was a shame that the stand-up stopped.

In case you haven't seen yet, this is really similar to something from one of the Genius series:

What do we want? MORE FREIGHT! Where do we want it? ON THE CANALS! Best of luck with whatever you do mate.