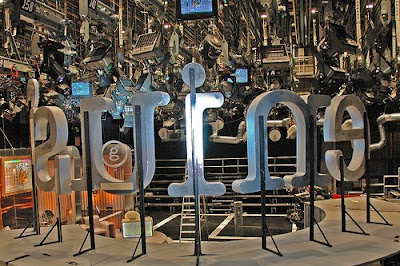 After shows three and four I said something about how every show was turning out really differently as the guests - and the people pitching their ideas - had all stamped their personalities on their respective shows.

There was no chance of the last two recordings bucking the trend as our guests were Johnny Vegas and Germaine Greer respectively. They were both on remarkably good form. There was a moment in Johnny's show when I looked across and saw people literally crying with laughter. The fact that I was experiencing no small amount of physical pain at the time wasn't unconnected. Definitely a highlight. For the audience at least.

Germaine really is a remarkable woman. She's sharp, witty, feisty, flirty and seems to have boundless energy. A real treat. The fact that she left our show and immediately skipped into the studio next door to appear on a live show - Newsnight Review - only served to underline quite how fab she is. She's a force of nature and quite, quite, brilliant.

There's always a strange low after something like this draws to a close. Making the show has occupied pretty much every waking minute of the last few weeks - and not just for me. So many people have been putting in remarkable hours to make things happen. From the outside looking in I think people imagine there's an endless pot of money in tellyland and that anything you want built will be... but obviously that's nowhere near the truth. We've had a small team working really hard with quite limited resources... tie that up with a show that is constantly evolving as the recording approaches and you don't get a show out the other side without people going the extra mile to help.

Well done, Dave. I'm sure the show with make a smooth transition from radio to TV, and prove excellent entertainment.

Any idea on when it's likely to be broadcast yet?

Well done from me too.

I can't wait for the show to be aired, sounds like it's going to be a real treat.

It isn't going to have the same theme tune as AYDG? and DGIAE is it?

Hey, long time reader, first (or at least early!) time commenter. This may have been answered elsewhere, but does anyone know if the pilot (with Steve Mangan) is going to be aired with the series? Or was that entirely just a pilot only to be seen by BBC commissioners?

The set looks very different to what I remember from the pilot recording so I suspect it'll be the latter.

I am looking forward to seeing the Germaine Greer episode. She's fab!

I can vouch for the "crying with laughter" statement - my sides ached for ages afterwards.

I assume it'll have to be cut down for broadcast though, which is a shame - but in full it'll make a brilliant DVD extra (should that eventually ever arise)

I'm loving the picture taken from the back of the set. Who would have thought so much kit was bolted to the ceiling.
It looks like a close up of the Death Star!

Re: the pilot. I don't suppose if you had any luck finding out if we pilot episode participants can get a copy of it ( I think I speak for all of us when I say we PROMISE not to put anything on the internet or anything).