And So We Face The Final* Curtain...

*When I say "final" curtain... I mean for series two. Series three will be along around the same time next year. So it's not final-final. Just final-for-now.

But the final-for-now, last episode of series two - episode 8 - gets its first airing tonight. Thanks to everyone who's tuned in throughout the series... it means a lot to me. 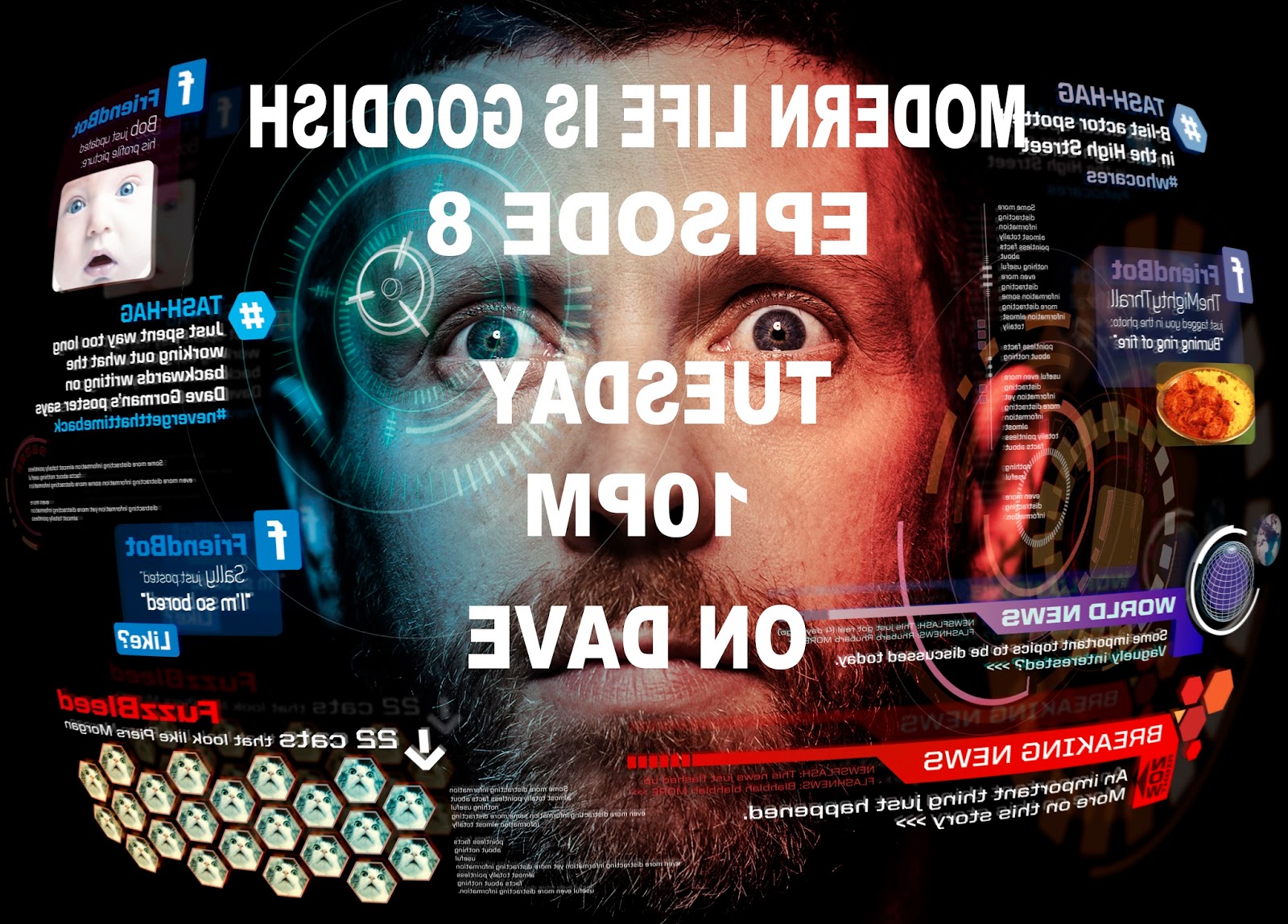 Nobody really knows how ratings work, but the first series was the channel's most watched original programme of the year and this series seems to have done even better. Across the various broadcasts in a given week, we regularly get over a million people tuning in.

I've only just been made aware of this article from Broadcast... 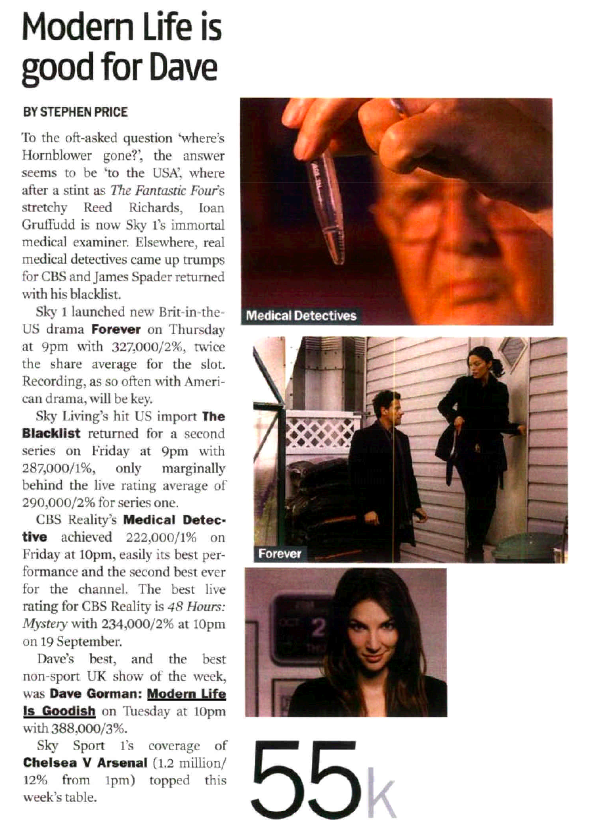 ... and that was written after week 4 or 5 and I know our numbers have been rising since then.
I hope you can catch the final episode of the series tonight. At 10pm. On Dave. (Unless you're in the audience in Tunbridge Wells - in which case, you have a very good excuse.)

I'm having a ball on tour and there's certainly enough demand to justify extending it... but that's looking tricky because we start work on series three early next year.

That's a good problem to have, obviously.

Hi Dave,
I love ratings. I love the mundane. I love how TV execs get excited about peaks, shares and overnights when they're not the full story. And I'm delighted that your ratings are Good..ish. Nah, they're excellent.

Here's a quick insight, which I hope helps.

The first ratings released are the overnights. These are basic snapshots - a kind of guesstimate - as to how many people watched live.

TV execs in commercial channels get very excited at one specific figure from those overnights: the peak. The peak is the highest rating from the overnight viewing and is often trumpeted by tabloids as the number of people viewing.

Confusingly, neither overnight nor peak are the rating you should quote. But you have to be patient with that. And even then, that final rating is not the final rating depening on how you view your telly.

My missus and I (she always watches nude so she can say it's the most fun you can have with no clothes on .. sigh...) we never watch live. She's out on a Tuesday night and I'm babysitting our nippers. So we record and watch later in the week using a Tivo.

If we were on the TV ratings panel, run by BARB, we'd count as a catch-up viewer. BARB counts all viewings in a seven-day window for the final rating.

To give you some idea, Doctor Who recently got an overnight rating of 4.6m, but 2.1m watched during the week, to give a final rating of 6.7m. Which is great.

But commercial TV execs aren't so fond of catch-up showings because many people do what we do - fast forward through the ads.

And that's where the additional viewing stream comes in - iPlayer. Or, in Dave's case, Dave On Demand (something I'm sure Mrs Gorman would love).

And all that doesn't include the repeats during the week! Some BBC Three shows get higher ratings on their repeats due to a different timeslot than the original broadcast.


So how does Dave's rating on Dave rate? Dave the channel is a Freeview channel and traditionally doesn't rate as much as BBC One or ITV. However, the way in which we consume TV has changed dramatically in recent years and it's not uncommon for ITV to get ratings of around 300,000 outside of peak time (7pm-10pmish, different channels define peak time in different ways).

Goodish is getting ratings that are more than goodish for Dave. Which is goodish for us as it means a third series of Goodish next year.

Or, as I like to think of it, Goodish, goodish gumdrops.

Thanks Bear for your lovely insight. I did kind of know most of it... what I really meant when I said nobody knows how it works is that nobody knows if it's at all accurate. (I wrote a little about it in the Vs The World book) Nobody counts how many TVs are on a given channel and even if they did, they wouldn't know how many people were in each living room. When we were told that 16 million people were watching Steve Davis play Dennis Taylor at snooker... they have no idea whether the Gorman family TV was tuned into it and have no knowledge as to whether the child, me, had stayed up past his bedtime or not. There's a lot of extrapolation and it's inevitably flawed. In this instance, it's nice to be on the right side of it.

For what it's worth, in series 1 this was the case:
The sho was the "...highest rating new commission on Dave last year and achieved an average audience of 532K (up 40% on slot average), peaking with 643K for episode 5 (up 69% on the slot average). The series also successfully attracted a younger audience to the channel with 42% 16-34 (26% up on the slot average) and is estimated by UKTV to have reached 5.2 million individuals." (See http://corporate.uktv.co.uk/news/article/dave-commissions-further-two-series-dave-gorman/)

The Broadcast article featured, was quite early in the series. I know the next week the audience was apparently 25% bigger again and was - for weeks 2,3,4,5 and 6 at least - growing week by week. (I haven't seen how the last two weeks did, yet... maybe nobody's telling me because we fell off a cliff!)

Like I say, there's nothing definitive about it. The reality is that the actual numbers of eyeballs could go down, but the ratings could go up. Still, nice that the show is perceived as doing well for them.

I was catching up with the series and thoroughly enjoyed the eggplant chef 'quote'. Genius! How can such a mundane sentence become a quoteworthy statement?

Sadly, it turns out it's not even true! The chef didn't say it - it was someone else, and he responded by providing a cooking recipe. At least, according to this website:
http://www.bonappetit.com/people/chefs/article/how-to-make-yotam-ottolenghi-s-eggplant-with-buttermilk-sauce

Just wanted to say that our family love this show!

Hi Dave, did I see you on itv's the chase last night? (16/10/2015) love the show and had to laugh after watching the one about lookalikes. Then blow me if I did not see you on the chase, you were like a bowl in a china shop as you were caught by the chaser and had a very mundane stab at it.