I enjoyed soccer am this morning. It's really relaxed and ever so slightly falling apart at the seams in a nice way. In the same way that opening a window on an advent calendar gets a child more excited about Christmas, talking about the Premier League All Stars event got me more excited about Tuesday's game too.

When I spoke to the researcher about the show a few days ago I ended up mentioning this football related looky-likey that I'd seen. It's from the video to the Kaiser Chief's song We Are The Angry Mob. One of the characters in the posh restaurant looks the spit of Rafa Benitez. Okay, he has a full beard... but last season Rafa had no beard and this season he has a goatee so it's entirely possible that he grew the full beard and then trimmed it back. I mean... it could be him. It fair freaked me out when I first saw it. It's probably been discussed elsewhere and I wouldn't have been at all surprised if they'd mentioned it on soccer am before now... but apparently not. Apparently they were planning to show it this morning. But - as happens so often on live TV, they ran out of time. So, seeing as I didn't have the satisfaction of sharing it with the world then, I'll share it with you now. The video can be found on youtube. And here's a screengrab from near the end: 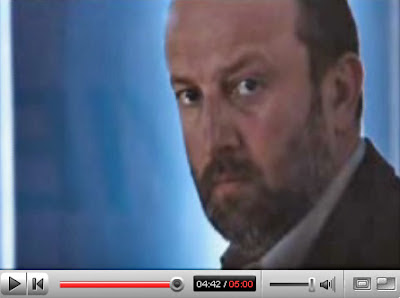 The only downside to appearing on the show was that afterwards my Mum called and asked me me to explain what I'd said towards the end of the first chat (clip.) I'm not going to explain what a camel-toe is to my Mum. If you don't know what it means, you're a winner. Continue not knowing. It's better that way.
Posted by Dave Gorman at 2:41 PM

Explaining 'camel toe' to one's mother isn't something I'd like to do either...

Yeah, I completely agree....I wouldn't want to explain camel toe...also, that really does look like Rafa!!

I don't know if you've ever seen Arrested Development, but one of the characters called Buster looks a bit like Rafa Benetiz (pre-goatee).

I love Arrested Development... but can't say I agree with you about Buster and Benitez.

you made me look up camel toe on wikipedia. I feel dirty now.

Ha! Very funny! It must be awful when parents can listen in on what is essentially pub talk. Good luck in the game

similar to having to explain to my Canadian friends how in the UK 'cottaging' doesn't mean going to the cottage for the weekend.

I think that Rafa is now a dead look a like for Peter Kay as Max from Max and Paddy.

Dave, did you do the Hollywood shoot out thing? And did you get it in?

No that Rafa has grown a beard, do you think he now wants to write a novel?