Hello blog. Nice to see you again. Sorry it's been a while. I didn't just give up on blogging though... I pretty much gave up on everything for the last few weeks. Everything that wasn't Genius anyway.

For about three weeks I was working seven days a week, mostly starting at 10am and finishing late. Like 2am. There wasn't really time in the day for a pause to stop and contemplate. Or blog.

But I'm properly delighted with the way the shows have gone. The format's had a proper big shake up. After the first series we were sent loads of ideas - more than we'd normally have to work with before a series - and we were really keen on getting more of them on screen. I don't just mean another couple either... I mean loads more. 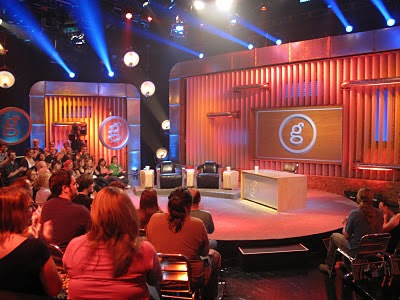 So instead of inviting a handful of people to come along with their idea and putting them in a sort of formal setting where they're taking the stand - as with the last series - this time we had around 70 people present, all of whom had sent in ideas and all of them had the opportunity to get involved. It means the show is more improvised, more energised and pacier because we know there's always something new to move on to. And it isn't always another what's-your-idea conversation either. It's been much looser for me to present and much more fun as a result. We also had two (and in one case, three) guests per show which threw up some really interesting double acts. All in all it's been a blast.

If you came along to the recordings - and especially if you brought an idea - huge thanks. It was ace to hang out with people before and after the recordings. Not least because the excitement I'd see on people's faces after the show always gave me confidence that the changes we've made to the format were for the better. Thanks!
Posted by Dave Gorman at 2:37 PM

Can't wait for the new series to be on the TV. Got to share my 'genius' idea and it was the best night I've had in ages. Quality!

Like the new blog style - looking forward to 2Genius :D

It all sounds very exciting Dave - is there a scheduled slot for the broadcasts yet? I trust you are chilling out a bit now!

Don't know when it'll be on yet... but I won't be shy of letting people know as soon as I do.

Not quite putting my feet up yet. I'm recording a DVD of the show I toured last autumn/this spring on July 12th and I need to get it back in my head after a couple of months off.

Had a brilltastic eve being on genius row in ep 6!! Would really like to see your show on the
12th July , but busy that night, are you free to do another show on the 15th which happens to be a better night for me?

"...delighted with the way the show's have gone." Tsk, tsk - never thought I'd see the ubiquitous 'greengrocer's apostrophe' on such an intelligent and urbane fellow's blog.... Alas, alack! This will never do!

@bizzybee: I have no idea what you're on about? Nor have I just edited the post to remove any offending apostrophe.

Really? Indeed, the apostrophe is now gone but I promise I did not imagine it...... how could I when I copied and pasted the text in quotes? I guess it's another case of them thar gremlins......