In August last year, while in Edinburgh, I found myself caught in a horrendous rain shower without a coat of any kind. Edinburgh weather can do that to you. I ran for cover and found myself in a high street clothes shop. I was on my way to do an interview that I knew was going to be filmed and so, rather than turning up like a drowned rat, I decided to buy a cheap waterproof jacket from the shop in question. 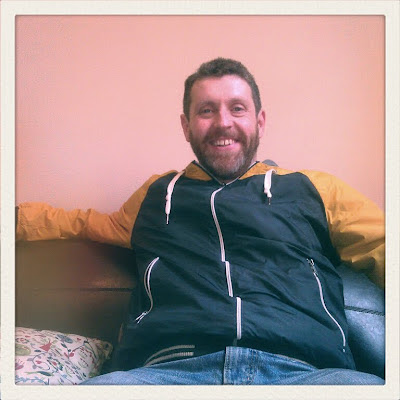 I have no problem using the word 'cagoule' to describe it. That's what it is. It's a cheap raincoat. I still wear it on occasions. Because it is very light it has been especially useful in the last few weeks of travelling in the delightful British summer weather. I can stuff it into a bag without it weighing me down or costing me space and if it rains - which it frequently has - then I'm okay.
In all the many times I've worn it, I've never had a sense that anyone has ever looked at me and thought anything other than, "oh look, that man is wearing a cagoule."

But that changed recently. While I was in Australia the second series of John Morton's sublime Twenty Twelve was shown on BBC4. I loved the show and luckily I had the foresight to set the Sky Plus for it... but it's taken me until recently to find the time to watch and enjoy.

In one episode, the storyline involved a young British hip hop star recording a song as part of an Olympics related campaign. And at some point, that character appeared as a guest on BBC Breakfast.

This is what he was wearing: 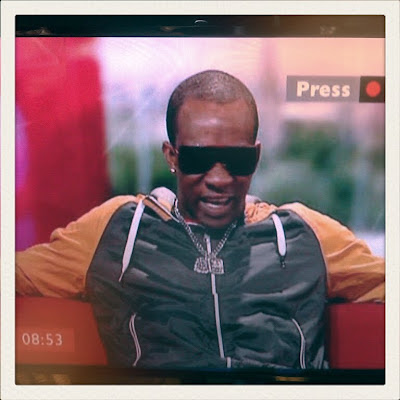 Astute readers will immediately spot that he is wearing my coat. So will non-astute readers. If your eyes are looking at the two pictures you can't not realise. (I imagine real hip hop stars are rarely seen wearing coats that cost fifteen quid... so hats off to the show's wardrobe department for dressing their cast so cost-effectively. But that is by-the-by.) What I want to know is how the same coat manages is a cagoule on me, but is cool on him?

But that's not where the strangeness ends. As Mrs G and I returned from our trip to Lewes the other day we walked, dragging a small suitcase behind us, through the streets of East London. As we did so we were approached by two young tracksuited men. They were carrying CDs and flyers. They set about trying to interest us in a gig that night. A hip hop show. When we declined the offer on the grounds that we were on our way home with our luggage they offered us CDs.


"That's odd," I said to Mrs G, when we'd walked a few yards past them. "Why would anyone look at me - a 41 year old man in a cagoule - and think I might be into hip hop?"
We paused. We both knew the answer. It was the coat.


This is the story that inspired this morning's radio show - and I was amazed by the number of people who had seen their own things on other TV shows. Thanks to everyone who sent an email, a tweet, a text, a facebook message or a carrier pigeon. You made me laugh a lot. Which is a good thing because I was knackered after last night's long drive back from Dudley.

Incidentally, the two songs I brought from home were:

She’s one of those people who seems to flit into the orbit of all sorts of other performers without ever quite getting the attention she herself deserves. She’s worked with all sorts of interesting people – including Chris Difford of Squeeze. (I mention him in particular for a reason – because he’s going to be joining us on the show next week alongside comedian Norman Lovett to tell us about the tour they’re currently doing together – I’m looking forward to that.)

Orion's Belt by The Robbie Boyd Band.
I've been listening to them a lot this last week. I'm hoping to get along to The Borderline to see them live on my day off from the tour - June 26th.

I'm rambling a bit. Probably because I haven't had time to stop and reflect. After the radio show - and after the podcast - I had to dash straight to the train station in order to board a train to Manchester because tonight the show returns to The Lowry... and I'm typing this out as we speed our way north.

I imagine the podcast will be out by now. You can get it here. Swindon tomorrow. We have a day off on Tuesday. But then the rest of the week it's Harrogate, Ipswich, Belfast, London and Tunbridge Wells ... and, of course, there's more to come.
Posted by Dave Gorman at 3:55 PM

Philip Schofield once wore my favourite blue and yellow Gallini (aka "Debenhams") sweatshirt in the broom cupboard. It was the closest I've ever come to feeling cool.

...and Jon Snow is frequently wearing my ties on Channel 4 news