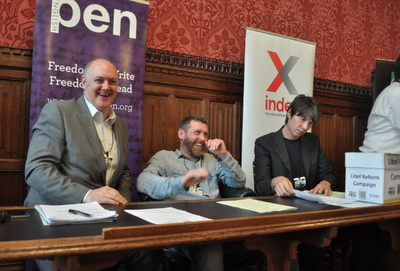 I'm indebted to @Dellybean for this picture taken in Common Room 11 at the Houses of Parliament where yesterday's Mass Lobby For Libel Reform was taking place.

My Mum's first reaction will be to swoon over the presence of Brian Cox. Her second will be to tell me off for my bad posture. I've always been a sloucher.

Never mind the fact that this was the occasion of my first (and no doubt last) speech in Parliament.

Or that immediately afterwards we headed to 10 Downing Street to hand in a petition. "It's all very well fighting for free speech," she'll say, "but you should sit up straight or you'll get a bad back."


She's right. I should. But we should also fight for free speech. What with it being free speech and that.

One of the problems with having proper celebs like Dara and Brian involved is that some people assume libel is some kind of celebrity issue. They hear the word 'libel' and they think of Elton John or Naomi Campbell and their dealings with the red tops. The campaign has nought to do with any of that. It's about the way in which libel is used to bully people into silence. Rich individuals and corporations are able to silence their critics simply by threatening a libel action... because very few people can afford to fight a libel case.

Matthias Rath is a doctor who sells vitamin pills. Not that much wrong with that. Except that was claiming that his vitamin pills can cure Aids. And cancer. And stuff. Ben Goldacre wrote about him in The Guardian. Rath sued for libel. The Guardian and Goldacre won the case but fighting it cost over £500,000. They will never recover the full costs. Winning a libel case has cost them 18 months and around £170,000. It also means that a chapter about Rath was omitted from Ben's book, Bad Science. (Although that chapter is now in the new edition and online for free here.)

How many people will fight a libel case - defend what they think is right - when the cost of doing so is years of your life and hundreds of thousands of pounds? We find out about the cases where brave people do stand and fight. What we don't see are the books and articles that don't get published because of the fear of litigation.

A young NHS biochemist spoke at yesterday's meeting. He's received a threat of libel for discussing treatments offered by a doctor that seem to be, let's say, outside the norm. He is not a wealthy man. He has no reasonable way of defending his point of view. He can fight and win... and be ruined. Or give in. He won't blog about science and medicine in future. He can't afford to take that risk.

Libel long ago stopped being to do with establishing the truth of the matter. It has become about establishing silence. And in some areas - public health and other areas of obvious public interest - silence is the last thing the world needs. The world needs debate.

The story of Peter Wilmshurst - touched on here - is another that illustrates what is wrong with the law at present.

Yesterday was an optimistic day. It felt like people understood why the draft bill isn't yet satisfactory.

Like many people, I first engaged with the campaign because of the Simon Singh case. The fact that the draft bill that is before Parliament does nothing to prevent a case like it happening in the future (or the cases of Wilmshurst or Goldacre) shows that it is incomplete. It doesn't address the very situations people set out to address.

But there is time. Amendments can be added. And for that to happen, people need to keep the pressure on their elected representatives to keep libel reform on the agenda. Do please write to your MP.  And I'll try to work on my posture.

You should read this article on sitting posture. It suggests that you've got it about right!

Bad posture? You should see a chiropractor! Do you reckon Simon could get you a discount?

Dave you don't look slouched to me - you look tiny!!!

Ga, one of the problems of living in Cambridge is that my MP is the only scientist in the Commons - he's already convinced up to the max!

I need to move back to my old constituency with it's wacky Tory MP...

Dave, do your proposed amendments/changes cover help for ordinary individuals who need to sue but have absolutely no way of doing so currently? I'm thinking of the Rod Liddle slander against M.E. and fibromyalgia sufferers that no one has done anything about. It isn't right that, just because he has access to a newspaper column, he should be free to slag off anyone he pleases with complete impunity and ordinary people, sitting at home, knowing this bile is being spread in a national newspaper are utterly powerless to defend themselves.

@emma6 that's got nothing to do with libel. Unless he's naming specific people and defaming them then it's not a libel related issue.

Hi Dave, great to speak at yesterdays Libel Reform event and meet you all. Nice newly discovered blog for us too!

I've certainly left inspired and determined to get these changes made to the Bill and get some decent Public Interest protection.
Are you happy to link the to the letter I described receiving from Schillings LLP trying to silence our forum discussion of a decided case?
Thought I'd ask before rudely spamming!
Kate @ Legal Beagles

On the above point there have been a few letters sent by claimant solicitors to forums/individuals which discuss cases which have already been decided and general censorship (post removals). I have accumulated a reasonable collection and have a tried and tested way for dealing with them. Because they lose the libel case, they try to threaten or actually sue for harrassment (because people are discussing the outcome) Solicitors do not like the fact they are being exposed on various sites for bringing claims which are judged 'vexatious' or an abuse of process.

I would be interested in seeing the Schillings letter. I would suggest you look at the Solictors Regulation Authority(SRA) rules on the treating other parties fairly. The SRA have taken action recently against solicitors after threatening letter writing campaigns.