So I've hit the easternmost point and turned the corner... but unfortunately I've turned into a headwind. Not a particularly strong headwind but a headwind all the same and it makes a nagging, persistent presence.

I was cycling from Lowestoft Ness to King's Lynn today and I honestly hadn't realised how far it would be. I think in that London-centric way where things out in that part of the world just have to be close to each other I hadn't taken in how far apart the two cities were. Even taking the main road between Lowestoft and KL - the A47 - would put the ride at more than 70 miles but no sane cyclist would want to do that.

My Human Sat Nav today was the smiley, charmer, Jon: 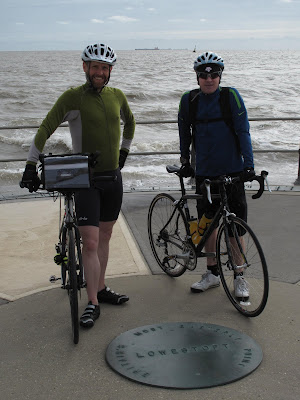 who took me on a fab route north to Caister and then west:

...stopping for a lovely home-cooked lunch courtesy of his girlfriend and friend Kirsty and Ruth. 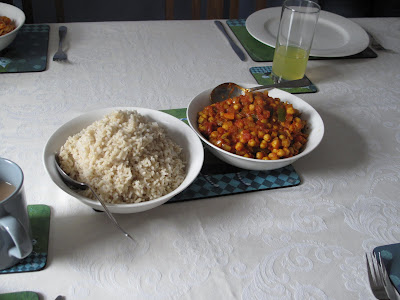 Sadly Jon found the second half of the ride much harder going than he expected and after around 70 miles he decided that while he was able to keep going he was becoming slower and was in danger of making me late for my show. In a manner that seemed genuinely heroic at the time he gamely suggested that I complete the ride alone... and in truth I was able to do the rest - there was about 15 miles left - in about an hour while it probably would have taken the two of us closer to two.

It was a lesson for me as to how my fitness has changed in a relatively short space of time. Today was by far the longest ride of the journey so far. It was the ride I expected High Wycombe to Cambridge to be and while I was sorry Jon couldn't complete it with me, I was proud that I still had that kind of finish in me after a long days cycling already. I wouldn't have been able to do that even a week ago.

Here I am with Jon, near the point when he gamely decided to cut me free: 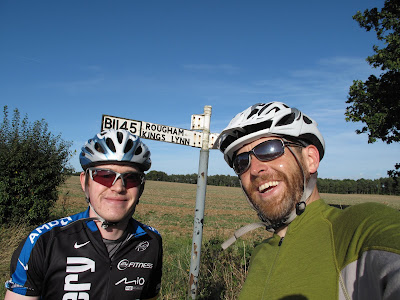 and here I am, alone, at the finishing line - the King's Lynn Corn Exchange: 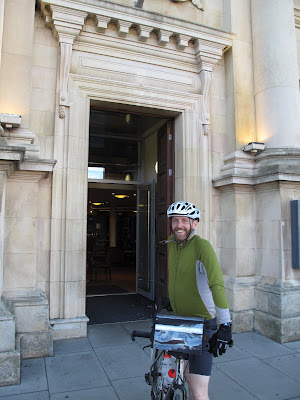 I'm delighted by the way in which I've been maintaining my weight. I've lost not much more than a pound in eleven days of exercise which I take as a sign that I've been eating and drinking pretty much the right stuff. But I think I must have lost some fat and gained some muscle because my jeans are noticeably looser around my waist and my thighs seemed to have two distinct muscles each where once there was one.

Another more obvious change to my body comes in the form of my tan lines. I wear gloves while I'm cycling so there are two ends to the tan. Ridiculous: 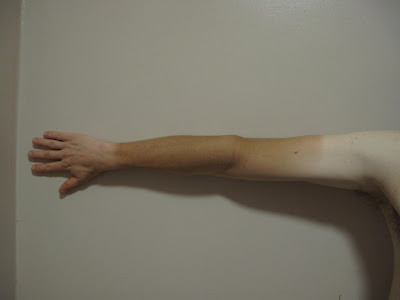 The tan's even more impressive as in the photos you have all of your arm covered!

Commiseration on the odd tan lines, my partner has striped legs and arms due to working on a farm and wearing wellies,shorts and various t-shirts! Good luck

Great show in King's Lynn. My son Rory, who's 13, loved it. He went to school a bit bleary-eyed this morning as we didn't get home til very late - but he will enjoy telling his pals on the bus all the jokes, though I reckon Ryan's contributions may be high up on the list. Best of luck for the rest of your tour.

wear sunglasses for the rest of the trip and you'll get some interesting facial tan-lines going on as well, will make you look like you need a good wash!

I noted at Ipswich that it looked as though you'd had to cinch in your belt with your jeans. They just had that size-too-big thing going on. Soon be time to get yourself some new clothes!

I had one of those tans after a golfing weekend once...

Hope you've arrived safely in Peterborough, very much looking forward to tonights gig. Word of advice - take your bike on stage wth you, bit of a dodgy area

@Lizzie: you're right. And they used to be relatively tight those jeans.

...so not only do you get to a do a special bike ride, meet great people, get adoring applause (c'mon, you know we all love you) but you get to be fit too - totally win-win!

BTW - we saw our Nan (86) on Wednesday for lunch and started telling her about what a great night out we had in Ipswich and she said 'is that the fella doing the bike ride?'. You can consider yourself truly famous if our Nan can be bothered to remember something about you!