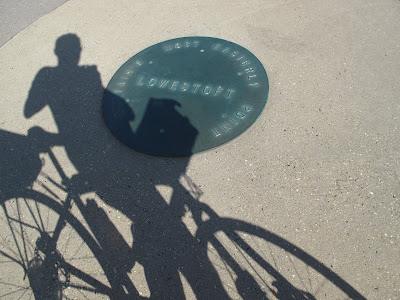 Well, ten days in and as you can see I - or at least my shadow - have made it to the easternmost point of the British mainland. Hurrah for things like that. So... here's how the last few days panned out.

Day 8's ride started at the Town Hall in High Wycombe, where Lloydy Junior and I were joined by Human Sat Nav, Chris: 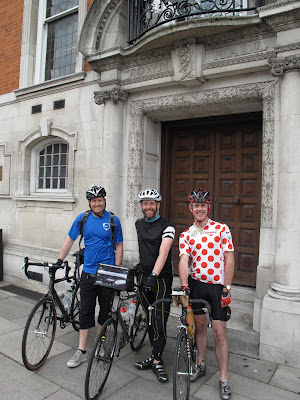 His polka-dot 'King of the Hills' jersey should have been a warning that this wasn't going to be the easiest of rides... but the fact that Chris has a robo-bike with his own home-made sat-nav holder bolted to the front of it... 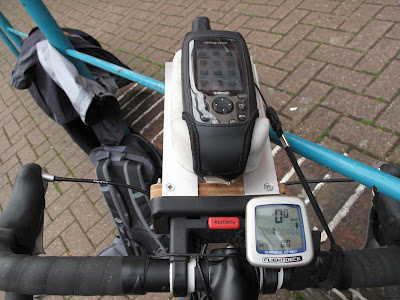 ... meant that at least the mileage was lower than I was expecting. When I first looked at it the route from High Wycombe to Cambridge came in at 88 miles... one of the longest on the whole trip. But Chris had programmed his sat nav well and had plotted a route that came in at around 70 miles. Here's the way we went... 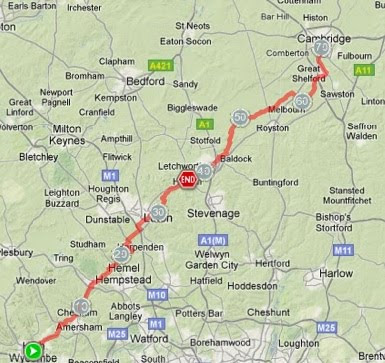 And here's how uppity-downity it was... you can see where we hit the fens:

I'm not sure where Chris or LLJnr disappeared to here... 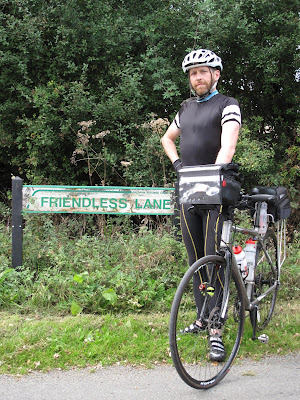 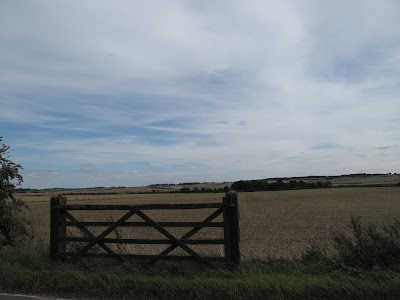 Here's Chris and I just before we crossed into the city of Cambridge: 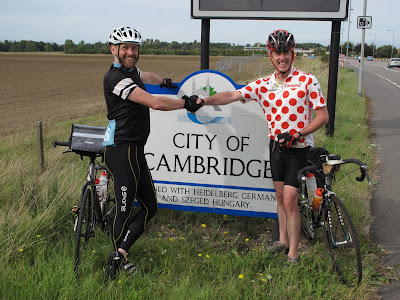 And here we are with LLJnr at the day's finishing line, the Corn Exchange: 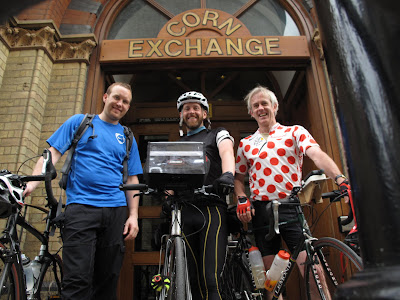 I was back there at the start of Day 9 to meet my next Human Sat Nav, Emma: 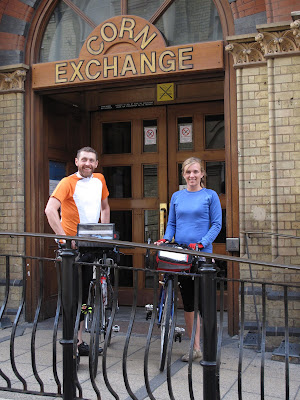 Her excellent navigating meant we went from Cambridge to Ipswich without having to deal with the horrible main roads: 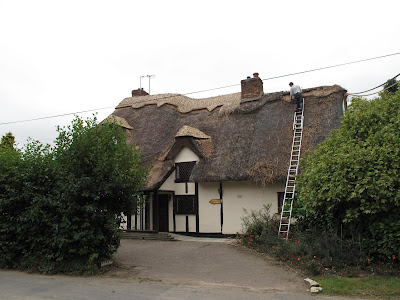 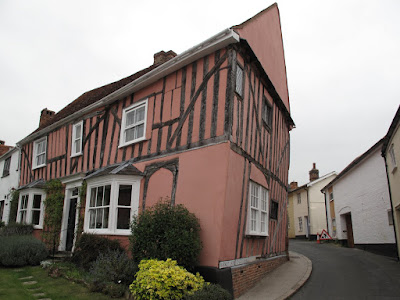 As you'd expect in that part of the world there wasn't much uppity-downity in this 60 mile ride:

And here we are at the end of the ride, outside the Regent Theatre: 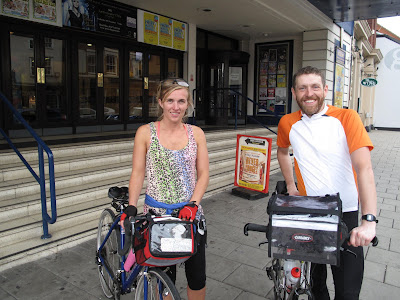 I had arranged a Human Sat Nav for Day 10 but while they replied to some e-mails a while ago, they haven't replied to any of my recent text messages or voice-mails... so I was getting worried that I was going to have to make the ride from Ipswich to Lowestoft alone. This was particularly worrying as my actual sat nav has been going haywire... for example, here's what it thinks I did in the middle of the ride to Cambridge: 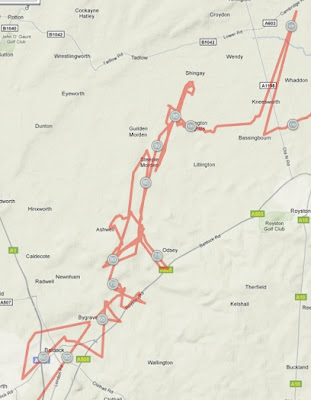 You can see why I didn't want to trust the machine to guide me and I definitely didn't want to trust myself because I knew I'd only end up taking the A12 and that would be horrible. Luckily for me the theatre was full so I had 1300 people in front of me and I figured there had to be at least one cyclist with the right local knowledge in amongst them.

There was. His name's Dave. Here he is outside the Regent at the start of Day 10: 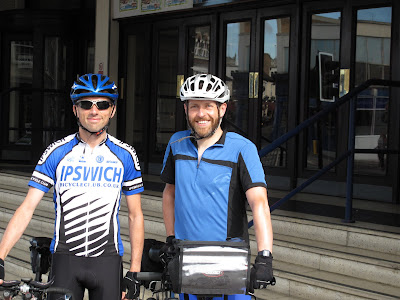 If I look happy, it's partly because I was relieved to have found someone as capable as Dave but also because I'd had a very good breakfast. This is why I like B&Bs and guesthouses more than hotels. You don't get a bowl of fruit like this - with figs picked from the garden - at many hotels do you? 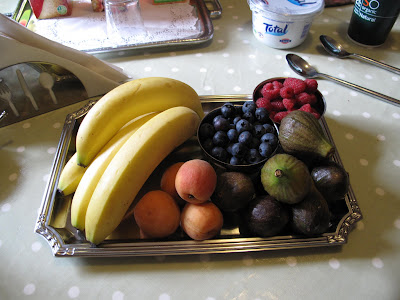 We took a great route through the Suffolk countryside: 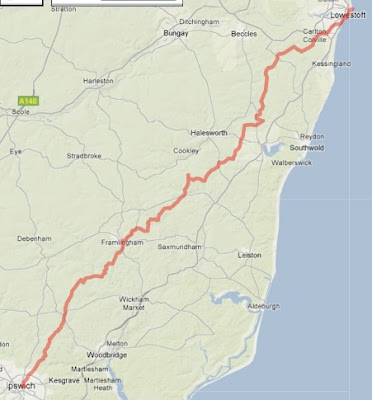 And I think the relatively flat landscape, a nice tailwind and some improvement in my fitness meant we averaged around 15.5mph for the 50 mile ride: 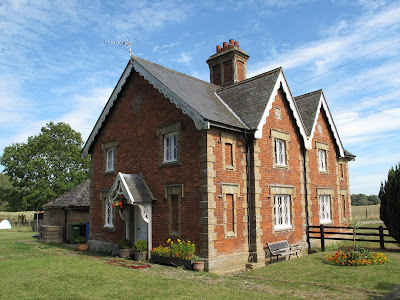 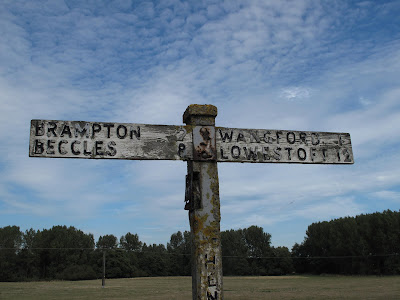 I've been getting a few messages from people on Twitter asking me what time I'm going to arrive at places and what route I'm taking and so on. The answer is always that I don't know. I'm letting my Human Sat Navs choose the routes and I really can't predict how long any given ride is going to take - especially when I don't know where we're going. But Gemma here saw that I'd mentioned we were leaving Ipswich at around 10.30 and took a good guess as to when we'd arrive at the easternmost point - Lowestoft Ness - so Dave and I actually had a welcoming party to greet us: 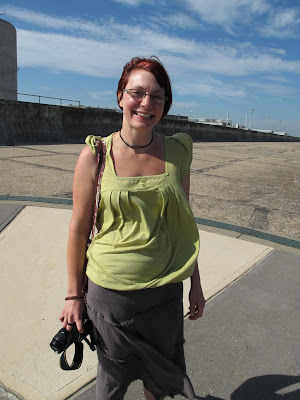 It also means there was someone there who was happy to take on the role of official photographer... so big thanks to Gemma for taking this picture of Dave and I at the finishing line: 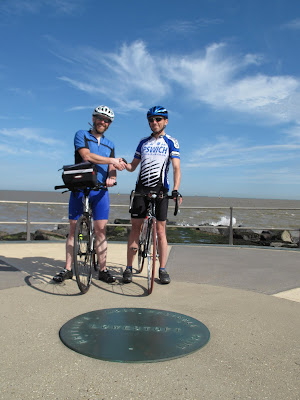 So there we have it... the first coast to coast is complete... I've gone from Lizard Point: 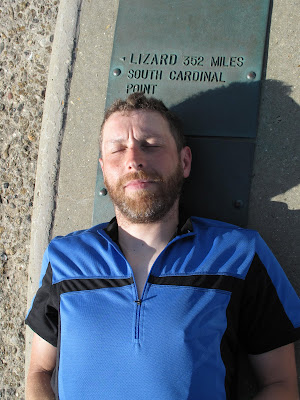 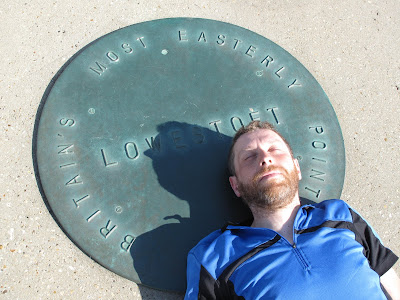 ... and now I start the long haul up to Ardnamurchan... 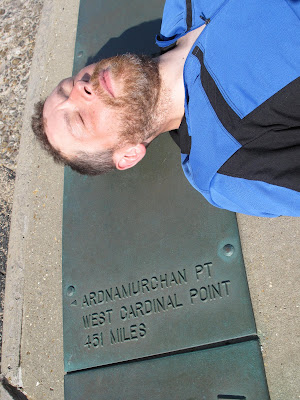 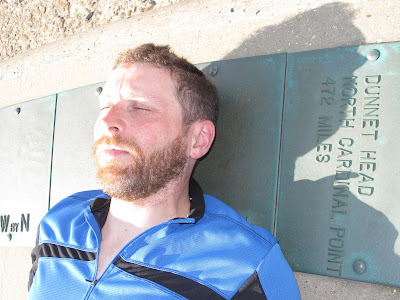 Two down, two to go - great work. Enjoy the increasingly uppity downittyness over the next few days

Congratulations on succesfully making it to the east side Dave, we came to see you last night in Lowestoft and was pleased to be entertained for just about 3hrs,, well done, Tony

Congratulations, Dave - excellent post! We're with you all the way.

Yay for Dave standing in for the peeps who let you down. Excellent work, Dave (you this time). Good luck with the weather for the rest of the trip.

Great work Dave, and thanks for keeping us Gorman junkies up to date. Can't wait till Sunday :)

Ooooh Ardnamurchan is my very best favourite place. You must go for a dip in the sea at sanna :)

Dunnet Head was lovely, but that might have something to do with the nice weather we had last year.

Good luck on the rest of the trip!

Small correction -It was Gemma who met you at Lowestoft, not Emma. She's my (very lovely) partner. :)

Dave was sitting behind us in the Ipswinican Audience. It is nice to know that he came up trumps.

Superb updates Dave. I really don't know where you are finding the time. I'm assuming you had a brilliant internet connection last night and took advantage of it

Congratualtions on your easternness! Only two more ernnesses to go. Go Dave!

Hi Dave,
Great blog! It was good to meet you and Dave yesterday. I really enjoyed your show last night. Hope your trip from Lowestoft to Kings Lynn went well. I have posted my photos of your arrival at the most easterly point on my Flickr page at: http://www.flickr.com/photos/g-hat/

Best wishes for the rest of your trip,
Gemma aka Welcoming party and official photographer (of your arrival at Ness Point, Lowestoft).

@Tim: I find when I'm cycling that my brain goes off and dances by itself for a while and for some reason, about 20miles shy of King's Lynn today I realised that I'd put Emma instead of Gemma. (Blame the late night and the presence of another Emma in the post for my confusion.) Anyway... I couldn't correct it til I got to KL... but I have done now.

@Andy: you assume correct. There's always a post-show adrenaline thing going on so I don't get as much sleep as perhaps I should right now.

Hi Dave,
We (my husband and I) came to see you at the Cambridge Corn exchange on Sunday. You were very funny and your jokes will remain a secret with me (mostly because I can never blooming remember them!). I thought you might like to know that Carrot cake is NOT the worst one, there is infact a Chocolate Beetroot cake! It has a rather strange aftertaste!
Good luck with the rest of your journey!

Cheers Dave - I don't blame you for being a little confused -it's all go at the minute. Cycle, show, cycle, show.

Anyway, good on you. Enjoy yourself!

Loving your updates Dave. The show in Lowestoft last night was bloody brilliant!!