You might have been able to guess from the speed with which I was able to upload maps and pictures from Day 11 that I had both a) a good internet connection and b) a working sat nav.

I've been sent a new Garmin Edge 705 and it's frankly embarrassing because I can now see that long before my first one went bonkers it was never right. When I first got it I thought it was quite impressive... but then I'd never used a sat nav of any kind before, in a car or elsewhere. So I just thought it took ages for them to locate a satellite every time you used them and accepted that it sometimes lost reception along the way and so on.

But it grew so erratic that it became obvious it was faulty. It was inventing ridiculous journeys to fill in the gaps between moments of lost reception and failing for whole days to ever find a satellite. It's dead. It's in Sat Nav Heaven. Or it would be if it knew how to get there. It's probably gone to Stratford upon Avon instead.

And I have a new one. And it finds itself really quickly and has yet to lose a connection. And if the other one hadn't gone completely nuts I would never have known how brilliant they really are. Lovely.

Anyway... here's the map of my journey from King's Lynn to Peterborough: 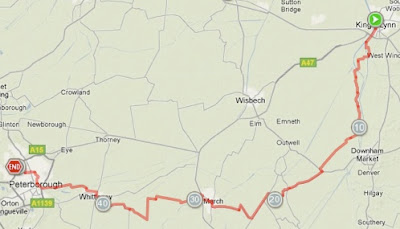 And as you can see, it was the flattest journey yet. The first one where, according to the uppity-downity chart, it all falls within + or - 0%!

I was guided by the very able Angus. There was some helmet confusion at the start of the journey (my tour manager Ed and I thought we might have left it in the theatre the night before) and I think that was the reason we forgot to take a starting line photo... but here we are having lunch in March. (The town, not the month.) 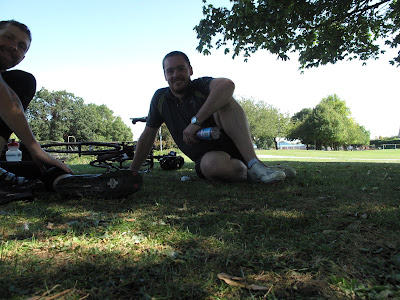 And here we are at the finishing line after a nice 50 mile ride. 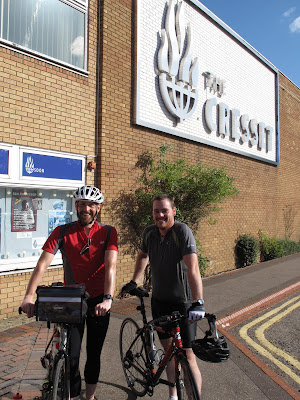 I'm pretty sure my fitness has improved enormously over the last few days. I know it was flat (and there was only the occasional headwind) but I was really surprised when Peterborough suddenly loomed up. I wasn't expecting to see it for another hour or so and it really didn't feel like I'd cycled 50 miles. I expect there'll be some hills on the ride to Leicester. Boo them... I've enjoyed the flatness.
Posted by Dave Gorman at 9:26 AM

Well done for getting so far Dave. The tales of your adventure give me such a warm feeling in my tummy; that you are doing this ride for your enjoyment; that so many people are willing and able to help out on your way; and that you can bring happiness to others through your comedy.
Good things happen to good people. Jolly good show.

At least some good came out of having a wonky Sat Nav.

If it wasn't for your Sat Nav being below par (not that you were aware of what par for Sat Navs actually is), would you have felt the need to accept the offers of help from the human equivalents?

Not too many hills from Peterborough to Leicester. You'll be undulating rather than climbing. But the traffic on the A47 can be nasty. Take care!

yes I like the human sat nav thing. don't get rid of that! its so cool

brilliant. loving the journey, wish i had the time and money to do the same.. ur getting some great weather too by the looks of it..

not as keen on the sat nav. i've always liked the experience of not really being sure which way i'm going.. makes it more satisfying in the end.. for me they should all be banned as works of the devil.

i'll probably buy one next week ... you'd recommend the garmin then?

@Simon: there were plenty of hills on the way... but then we weren't on the A47. I met someone last night who simply refused to accept that I'd got from King's Lynn to Peterborough without using the A47... because surely-that's-the-road-that-links-the-two but the truth is there are loads of back ways, unmarked roads and a network of pretty villages linking the country up.

@getting: No worries, I won't be getting rid of the Human Sat Navs. Having company on these rides changes them immensely. Good for morale. Great way to see Britain. And the routes they're taking me aren't - I imagine - the routes an actual sat nav would recommend.

@sits I would recommend it. Now that I've seen a good one at work, I definitely do. I'm not really using it to find my way as such... but as a record of where I've been and so on it's invaluable to me.

I'm glad you made it safely to and from Peterborough Dave. My wife Wendy and I enjoyed your show at the Cresset theatre immensely and I would urge anyone who can still find a ticket to purchase it and get yourself along for a wonderful evening's entertainment.