There was an imbalance between these two days. The first of them was an easy, flat 30 mile ride while the second was a rugged 60 miles with plenty of climbing and effort required. If I was setting this up again knowing what I know now I'd have probably done things differently and stopped at Tyndrum instead of Ardlui making it two rides of roughly the same difference.

Here I am at the start of Day 25 in Dumbarton. The chap on the left is Chris - he was my Human Sat Nav for the day. The other chap is Mark. He was in the audience the night before. We chatted after the show and he decided to come along too. 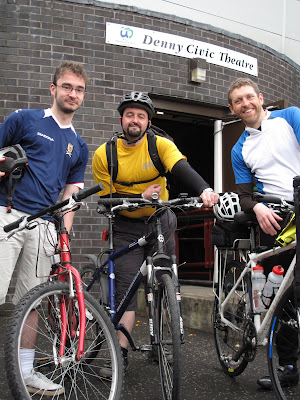 I was quietly dreading this ride because it looked to me like I'd end up having to cycle most of the way on the A82. It's a busy road and traffic makes any ride less fun. But as it was, between them, Chris and Mark showed me a network of cycle paths that took us all the way to Tarbet... so we only ended up doing the last section on the 82. 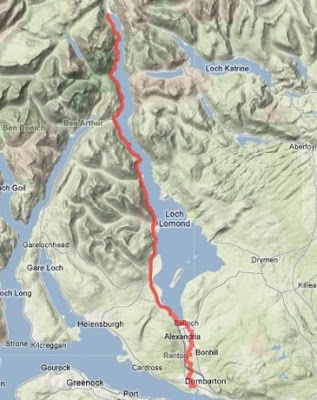 As you can see, much of it was hugging the bank of Loch Lomond... which means we were pretty flat too.

Ardlui is a strange place. In that it's not really a place. There's a hotel there... and that's pretty much it. There isn't anything resembling an actual village that I could see. Quite how it's got a place name all to itself I dont really know... still the gig wound up being fun. 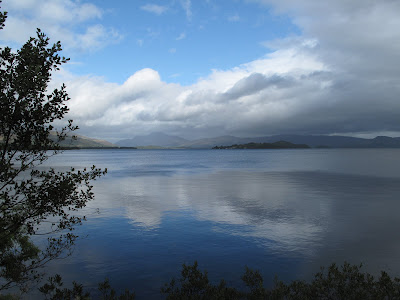 We made a couple of stops, including one in Luss... 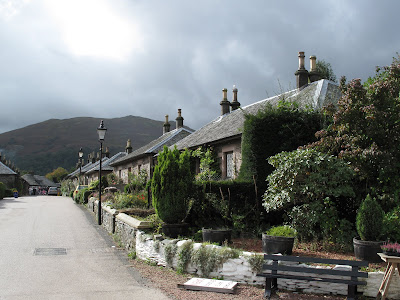 and somehow every stop seemed to work to our advantage weatherwise. We saw a lot of rain but I didn't really get wet much. We also saw patches of sunshine and because there was a bit of everything that means we also saw quite a few rainbows. There were at least four along the way. They seemed so vivid in real life... they definitely lose something in a photo. 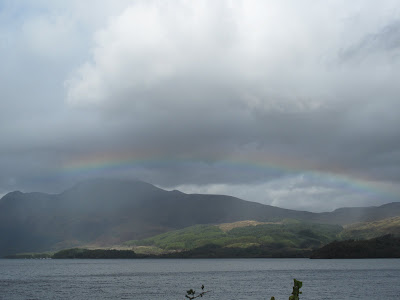 Here we all are at the end of the ride: 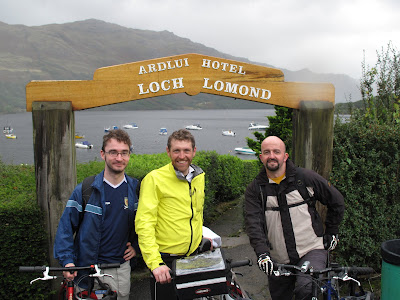 I was there again for the start of Day 26: 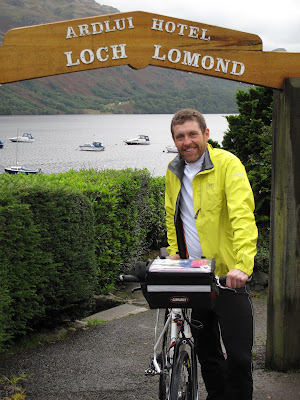 As you can see... I was on my own. This was the first day that I didn't have a Human Sat Nav. I can see why... I mean, nobody actually seems to live in Ardlui so how was I ever going to find a local to guide me. Not that I needed guiding... there is only one way from Ardlui to Fort William. The A82. 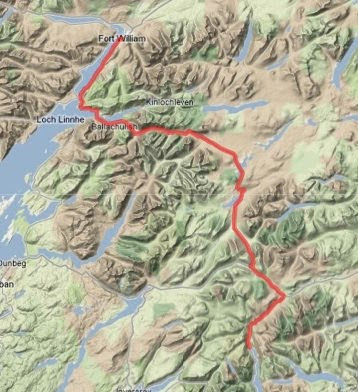 As you can see, it involved some climbing:

It was a wet and wild day... especially once I'd climbed up on to Rannoch Moor... 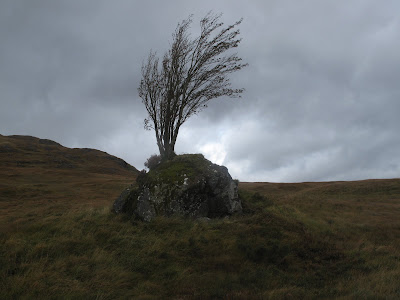 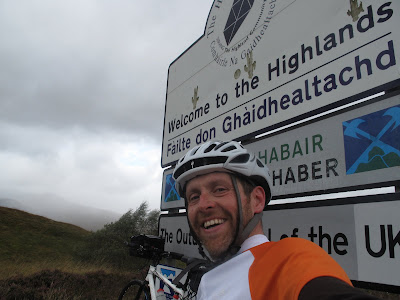 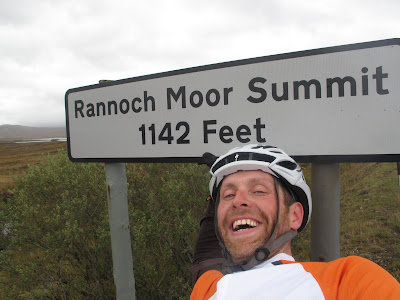 You'd think the downhill that followed would be really exciting... and in good weather it might well have been. As it was the wind was so strong that I could't really freewheel as I came down into Glencoe. Oh well. Here's what most of today looked like: 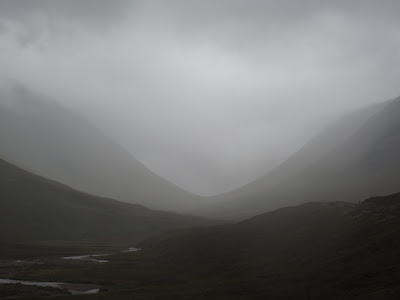 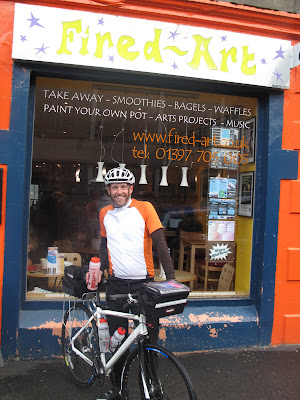 I've only ever seen Glencoe pouring with water, your photo leads me to believe the sun never shines there.
Great pictures, looking forward to the rest of your Scottish stint.

Welcome to the Highlands, Dave! Glad you've made it this far. Well done. I'm going to the Inverness show and very much looking forward to it.

I've always wanted to do the Glencoe descent on a bike having driven it 10s of times, but it can't have been fun in that rain.

At least it slowed you down I suppose - it's pretty hairy when the sun is out and cars keep stopping to look at the view.

Was there a lone piper half way down?

Another great blog entry Dave - thanks for keeping us all up to date, it's exciting stuff! Can't wait to see the show next March and intrigued to find out how tomorrow's gig in a railway carriage is going to work out!

Oh oh! The Rannoch Rowan! If I had to choose a favourite tree that would be it. The sun does shine in Glencoe occasionally, and when it does there's nowhere on earth I'd rather be. Best of luck with the rest of the trip Dave!

So did you enjoy the chance to ride on your own for a change or were you missing having a human sat-nav?

@Teeny: I had no idea it was such a well known tree! I just stopped to photograph it because it seemed so strange that it could live on a boulder like that. Quite where the roots go is beyond me... but I thought it was an inspiring example to me on a tough day to keep on trying against the odds.

@trio: I did enjoy doing the ride alone - it was nice to prove to myself that I could and I did do some good thinking - but I don't doubt that it would have been a more fun day with a Human Sat Nav. Of course the fact that there was only one way to go - and it was all on the same road - did mean that actual guidance wasn't actually necessary this time.